World’s cheapest overwater villa holiday is now in Malaysia: US$112 per night

Ever since that movie came out and everyone started using the expression like they’d been using it all their lives, millions of people now have a spot on their “bucket lists” to spend a holiday in an overwater bungalow or water villa. The problem for most of us is that those things are damn expensive and they go up from there, at least until now.

In 2011 the Golden Palm Tree Resort & Spa slowly opened up, featuring 392 overwater villas, off the coast just south of the Kuala Lumpur International Airport. When it opened room prices started over US$350 per night and they included meals, but recently things have changed and they are offering online specials starting at US$112 per night (plus tax) not including meals (edit: I’ve now seen a rate as low as US$106 per night). This rate is per room for two people, not per person, and it’s a brand-new luxurious resort with a location that is convenient to most of the world.

Edit: As of February 2013 the lowest rate I’m seeing at the Golden Palm Tree Resort is US$155 per night (plus tax) for two people. Prices might go lower again, but right now US$155 seems to be the bottom.

Comparing holiday prices for overwater villas around the world

While these new online special room rates are stunning on their own, when you put the cost of getting to a resort into context it’s an even better deal. Unfortunately, pretty much every alternative is expensive and complicated to reach and then more expensive once you get there.

Until late 2013 when the Sandals St. Lucia Grande debuts its 26 overwater bungalows, all the Caribbean overwater bungalow resorts offer “eco-resorts” that are great for scuba diving but quite unlike the “honeymoon-style” overwater bungalows in the areas above. All of them have remote locations and prices start at around US$250 per night in off season, except for the most “rustic” ones.

Why such a difference? 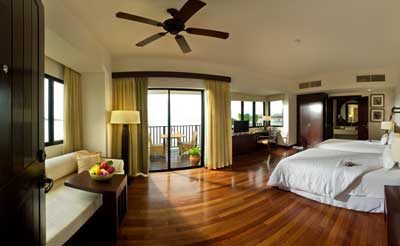 Most of the 5,000 or so overwater rooms in the world are in the Maldives, which is just southwest of India. Room rates are quite reasonable if you shop around for online specials, but it’s a long and expensive flight to a remote airport, followed by either an expensive speedboat ride or a more expensive sea plane ride to your resort.

For those from the United States and Canada they can more cheaply get to the overwater bungalows in Tahiti, Moorea, or Bora Bora, and that will include an expensive flight between Los Angeles and Tahiti, plus quite a bit more to get to Bora Bora or if you are starting from somewhere other than Los Angeles. The best Bora Bora resorts also charge for the speedboat ride from the airport to the private islands they are located on.

The Golden Palm Tree Resort is by far the largest overwater resort in the world, so its operating costs per room are much lower. It’s also located a short taxi ride from one of the best airports in Asia, with cheap flights coming in from around the globe. Kuala Lumpur prices for most things are much cheaper than those other areas as well.

Take a look at our list of the world’s cheapest water villas and overwater bungalows for more specifics.

What you should know about the Golden Palm Tree Resort 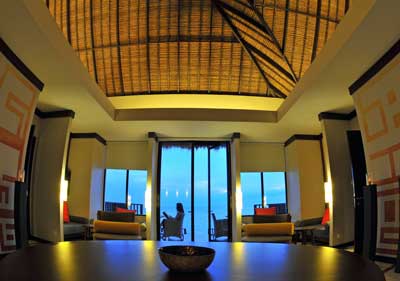 The Golden Palm Tree Resort & Spa just opened in stages over the course of 2011, so it’s new and located in an area with no other water villa resorts. The original promotions they offered started at around US$365 per night including meals, and it appears that they have moved to an ‘a la carte’ pricing plan, bringing rates WAY down in the process.

The rate of US$112 per night for a Premier Traveler Palm Villa was spotted for a 3-night stay in August, 2012, which is one of the busier and drier months in the area. That rate includes a 30% Early Bird Discount and is only available on Agoda.com. Two-bedroom and 3-bedroom water villas are available at marginally higher rates, but still amazing deals at the moment. The promotional deals available on the resort’s official website aren’t nearly as good. 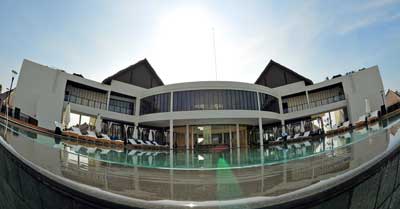 The resort does not allow guests to bring in outside food and drinks in, so evidently their crazy room rates are partially supported by guests eating and drinking in the 7 restaurants and bars on site, and those are likely not quite as cheap. Also, it appears that most activities aside from sitting by the infinity pool cost extra, including sailing and windsurfing, so those who want to do a lot might end up spending a lot more.

Also, it’s worth noting that the initial reviews for the Golden Palm Tree Resort were somewhat mixed. Most guests loved the rooms, but as the resort was in the process of its initial opening some complained that things were disorganized and inconvenient. It appears that more recent reviews are consistently better, but it’s still a good idea to keep your expectations in line with the room price, as usual.