Have you ever wondered how much it would cost to stay in all those luxurious hotels that are always on the news and in travel shows? We have too, so we decided to investigate. Below are 11 of the world’s most famous 5-star hotels, along with the cost of the cheapest room available online, and the most expensive.

In at least a few cases, these hotels reserve their biggest and best suites for direct reservations, or maybe they don’t want to risk having a $25,000 per night room booked as a prank by some kid with their parent’s credit card. Either way, even the ones that are available are out of the price range for most of us. 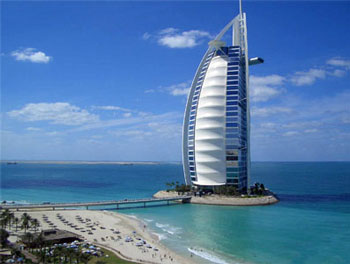 Sometimes referred to as the world’s first 7-star hotel (though not by the hotel owners), the Burj Al Arab is an amazing complex by anyone’s standards. Built over its own artificial island, it’s the world’s second tallest stand-alone hotel at 321 meters (1,053 feet), yet it only has 60 stories and 202 total rooms.

Each room is on two levels, and the smallest rooms (which are suites) are 169 m2 (1,820 sq ft), while the largest (The Royal Suite) is about five times that size. In order to actually book their high-end rooms you might need a super-deluxe travel agent, as they don’t appear to be available online. 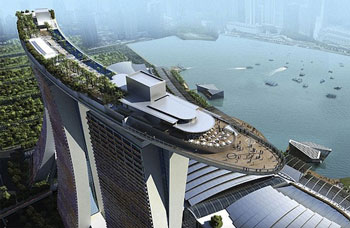 Only officially opened since April, 2010, the Marina Bay Sands Hotel seems to be everywhere already, with the most attention focused on its 146-meter infinity-edge swimming pool set in its 340-meter SkyPark, stretching above its three 55-story towers. With 2,561 rooms, this is one of Asia’s largest hotels.

The Las Vegas Sands corporation built and operates this striking hotel, so it’s no surprise that it contains a huge casino, as well as an Art & Science museum, a mall, and even an indoor ice-skating rink. Most of the attention is on the roof though, where in addition to that pool you’ll find nightclubs, restaurants, a park, and a public observatory. 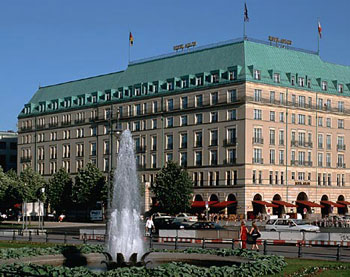 The Hotel Adlon, which overlooks the Brandenburg Gate from the eastern side, was already Berlin’s most famous hotel way back before World War II. It was naerly bomb-proof, and known as the place where foreign dignitaries and celebrities would stay whenever they visited town.

In fact, I happened to be walking by its front entrance in 1999 when I saw a commotion that included Mikhail Gorbachev, George HW Bush and Helmut Kohl emerge from cars for a celebration there commemorating the 10-year anniversary of the fall of the Berlin Wall. Then in 2002 Michael Jackson bizarrely dangled his son out one of the windows, and that has been its calling card ever since. 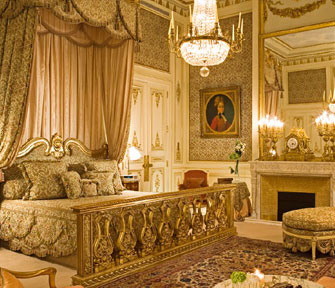 Opened in 1898, this 5-star hotel has long been the home of the super-rich and super-famous from abroad when they visit Paris, including Ernest Hemingway, F. Scott Fitzgerald, and Elton John, plus Coco Chanel who lived there. It has 159 rooms, many of which are huge suites, and a two-Michelin-starred restaurant. In 1979 Mohamed Al-Fayed bought it, and spent a fortune renovating it into the luxury retreat it is today.

The Hôtel Ritz is probably most famous these days for being the departure point for the fatal ride for Princess Diana, Dodi Al-Fayed, their inebriated driver Henri Paul, who was the hotel’s head of security. It’s still one of Paris’s finest hotels, though Mohamed Al-Fayed is said to be trying to sell it.

Said to be London’s first luxury hotel, The Savoy opened in 1889 along the Strand in Westminster, and has been London’s most famous hotel ever since. It introduced hotel-wide electricity, elevators, and private bathrooms to the city’s hotel scene.

Now owned by the luxury Fairmont brand, and only reopened in late 2010 after a long renovation, the Savoy has long been the London home of an amazing list of celebrities including Charlie Chaplin, Frank Sinatra, Marilyn Monroe, and John Wayne. It’s still a favorite among today’s celebrities, so it’s one of the better places to spot stars, and staying there yourself gives you an inside track. 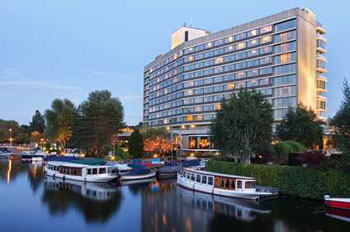 Unlike most of the others on this list, the Amsterdam Hilton has kind of an inconvenient location, and its normal rooms aren’t among the most expensive in the city. This is because it’s mainly just a business hotel, built in 1962, and it continues on in that regard today.

The Amsterdam Hilton is definitely most famous as one of the two locations (the other being in Montreal two months later), where John Lennon and Yoko Ono held their famous “Bed In” for peace. From March 25 to March 31, the couple invited the press into their room from 9am to 9pm to promote their cause. Interestingly, you can still book the “John & Yoko Suite” yourself, and it’s not even their most expensive room. 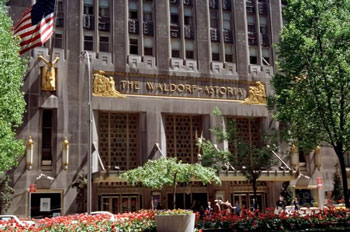 Arguably one of the world’s most famous hotels, the Waldorf-Astoria began life as two hotels – the Waldorf, opened by William Waldorf Astor in 1893, and the Astoria, opened by cousin John Jacob Astor IV in 1897. In subsequent years the two merged into one, and were later bought by Hilton Worldwide. With 1,508 rooms, it’s one of the city’s largest hotels, and its cheaper rooms are quite affordable considering its Park Avenue address.

The Waldorf-Astoria invented room service and the Waldorf salad, but it’s the famous guests and residence that have brought most of its notoriety. Former U.S. president Herbert Hoover as well as retired U.S. General Douglas MacArthur both lived here, as did Benjamin “Bugsy” Siegel and Marilyn Monroe. Its most famous recent resident was Paris Hilton, who spent much of her childhood living their with her family (and her now-forgotten sister Nicky). 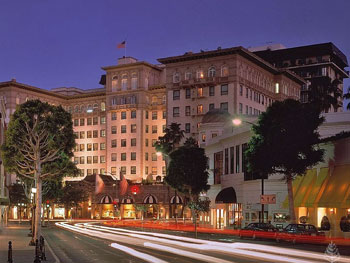 The City of Angels is littered with famous hotels, and we considered instead using the Beverly Hills Hotel or the Chateau Marmont, but we settled on the Beverly Wilshire for its Wilshire Boulevard location facing the fancy end of Rodeo Drive in Beverly Hills.

The Beverly Wilshire is now part of the Four Seasons chain, and it’s usually housing at least a handful of celebrities, plus a frequent location for filming HBO’s “Entourage.” But more than all that, this is best known as the Pretty Woman hotel, where Richard Geer’s character shacked up with Hollywood’s most angelic streetwalker in the 1990 film.

With their “cheap” rooms being the most expensive bottom-level accommodation in the city, the Park Hyatt Tokyo with its Shinjuku district location was already a major player for the rich, famous, and powerful. But in 2003 it became known by the rest of us as the Lost In Translation hotel, where Bill Murray’s and Scarlett Johansson’s characters stayed and spent most of their time.

Those who might not be able to afford the rooms and who might want to just poke by should be aware that the hotel and its reception begin on the 41st floor of it building. The New York Bar & Grill, which features live music nightly, is a on the 52nd floor and continues to be a popular stop for movie buffs, but it’s best to go before 8pm as from that point on they add a 2,200 yen (US$26.92) cover charge to the already-pricey food and drinks. 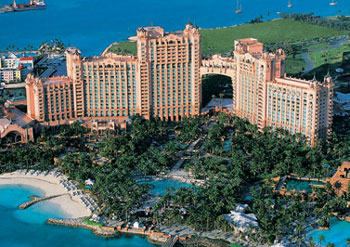 Although the Bahamas is perhaps the most affordable Caribbean-island nation, that doesn’t really apply at the enormous Atlantis Paradise Island Resort. This huge complex featuring a casino and a famous water park is not for spring breakers on a budget.

The most striking feature of the hotel is the 23rd-floor bridge between the two sections of the Royal Towers, which contain their Bridge Suites. At almost 5,000 square feet and with a dedicated staff of 7 for each room, they are said to go for US$25,000 per night, though they don’t seem to be available online. 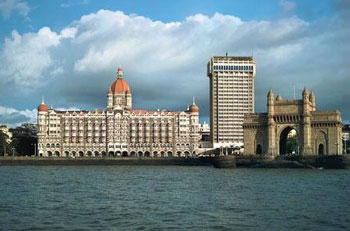 Opened in 1903, the 565-room Taj Mahal Palace and Towers has long been the most famous hotel in India, and its location near the Gateway of India in the tourist district of Colaba has also made it the most visible. This is where the rich and famous stay when in Mumbai, and it’s hosted the Beatles, Bill Clinton, and Barack Obama among many others.

Sadly, the Taj Mahal Palace and Towers is now famous the world around as one of the two hotels where a small group of heavily-armed terrorists shot at anyone they saw and kept police at bay for two and a half days in November 2008. The hotel was restored and finally reopened in August, 2010.

Why booking hotels online is almost always cheapest, and you often get better rooms Quito, Ecuador: What to do and budget tips for visitors Apartments in Europe: Easy and cheap ways to book short-term stays Best Punta Cana all-inclusive resorts