Visiting the Swiss Alps on a budget: Lucerne and Interlaken

Why is it winter vacationers dream of the Swiss Alps? Maybe it’s the luxurious ski chalets brimming with goblets of hot wine and jacuzzi baths bubbling to the brim. For the sporty types there’s always the perk of the softest snow around for the most adventurous downward slalom. Or is it the view of the Swiss countryside that has no rival?

It could be all of the above. But the equalizer between the jet set crowd and the budget travel crowd is that some of the best activities in the must see Alps regions Interlaken and Lucerne aren’t expensive. Nor are they strictly seasonal.

Where are Lucerne and Interlaken and why visit?

Lucerne, or Luzern in German, is the sixth city of Switzerland, boasting a population of 76,200 people and growing; and marking it as the most populous in Central Switzerland. 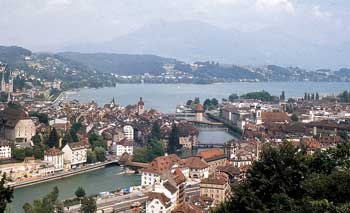 Why is it a must see region? It sits at the foot of the Swiss Alps and on Lake Lucerne. Therefore it is prime real estate for boat trips, ski trips, hiking, stand up paddle surfing, numerous concerts and music festivals, a bevy of railway transports that will spirit you well into the majestic Alps, ropeway gondolas and aerial cable cars that give a panoramic view of the world below, and shopping galore.

Interlaken for its part is a city belonging to the municipality of Berne, the Swiss capital. It sits along the Aare River between Lakes Thun and Brienz. And its rich history boasts somewhat tragic dalliances with Lord Byron who was once a prisoner in Switzerland and inspirational ones with composer Felix Mendelssohn.

So why should you jaunt to Interlaken for your Swiss vacation? Just like Lucerne, it’s an essential gateway to the Alps and two prominent Swiss lakes. That being the case, one’s options for adventure and sightseeing are near limitless: skiing, hiking, swimming, fishing, museums, shopping, and plenty of exotic eats unique to the region.

When to visit Lucerne or Interlaken 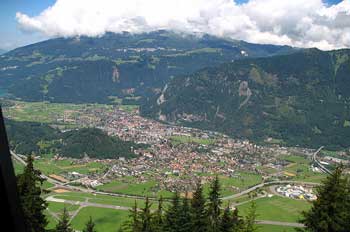 One immediate rule of thumb when travelling to either Lucerne or Interlaken is that in the mountains winter is peak season and in the valleys summer is peak season. Therefore prices of hotels, activities and events tend to rise during those periods. But both regions are rich in activities that don’t actually break the bank regardless of the season. So choosing the time in which you pack your bag for either region will ultimately depend on what it is you want to do.

For the winter types hoping to get some skiing in as well as an evening set before a delicious fondue, vacation packages are best bought at least a month in advance. If it’s a month like December or January, plan several months in advance to avoid the price gouging that is the Christmas and New Year season.

For your summer sun worshippers, a month in advance is a golden rule as well. But a word to the wise, August is the best month to book. Europeans tend to vacation the month of August, including the Swiss. That means vacancies abound. You won’t be the only one privy to this bit of behavior, so book for August well in advance if you can.

If arranging your vacation piece by piece, nail down your flights if nothing else. Hotels are always offering bargains. So it’s quite easy to walk into a hotel and get a bargain on the spot.

And transport between an international airport hub like Geneva and either Interlaken or Lucerne can be whittled down to a small price (i.e., senior fare, half price day trip tariff, student fare). And CFF, the Swiss railway, tends to offer big promos in the lead up to the summer months. So you’d be well-served to troll their site for updates.

Where to stay in Lucerne or Interlaken

One of the easiest ways to find a place to nestle your head is to consolidate all your resources. The Lucerne SnowCard for example offers visitors a chance to partake of all the ski slopes on hand, dining, and hotels. An example package may include a night’s stay plus dining and skiing for 140 CHF. Your hotel, dinner and skiing are all sorted. You only need to get there. And that’s made easy by way of railway.

Speaking of CFF, one of the major promos on offer is a package deal that includes transport to Lucerne, 3 days and 2 nights of accommodation for 200 CHF. So upon reaching Switzerland, your options for package deals are endless: railway passes that include transport, hotel accommodation, ski passes and meals; Lucerne’s very own snow card that features skiing, sightseeing, meals and accommodation; or various other local package passes that will do ultimately the same like the Visitors Card. 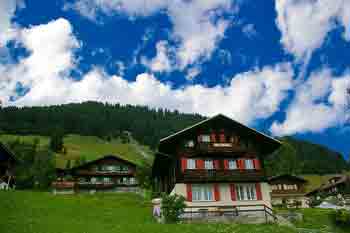 Interlaken offers a Winter Sport Voucher that for 2 nights accommodation and 3 days of activity gets you access to the slopes, meals and a place to rest your head for roughly 144 CHF. The official office of Tourism for Interlaken has a phone book of package deals that include skiing, shopping, and accommodation all in the 140 CHF range for 1 to 2 nights.

Another option is camping. Lucerne and Interlaken both offer exceptional options for pitching a tent, sleeping in a camper, or hitting the hay in a caravan in idyllic settings. For example, a night’s stay in a caravan fit for up to 4 people along the beach in Lucerne can run for roughly 70 CHF. A dorm room can run for 25 CHF.

And if hotels and camping are not an option, there are an endless variety of hostels on hand that range in price from 27 CHF and up. Many of the hostels are within striking distance of the slopes.

What to do in Interlaken and Lucerne 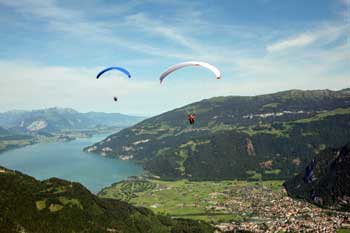 Interlaken is brimming with activities for the sporty set or equally for lovers looking for a lovers holiday. A perfect combination of both is the Alpine Gardens in Schynige Platte. Boasting over 600 species of flora and fauna, a two-hour circuit of hiking trails, and a vast expanse of panoramic alpine views, the Gardens are a must see. A full fare for entry is only 4 CHF.

If you’re keen to get your adrenalin pumping why not try some river rafting, canyon or bungee jumping, paragliding or ice-climbing? Or you can try all three and more for under 300 CHF. Of course you can always take on some of the challenges without a guide and for considerably less of a fare.

Stand up paddling, swimming, and paddle boats are all available options at Bönigen Lido on Lake Brienz from May to September for free. Kayaks and canoe hire for a day on the lake typically run 60 to 70 CHF. If skiing or snowboarding are on the menu, take the free ski bus from Interlaken to Jungfrau’s community of ski resorts. Prices for use of the slopes range from as low as 11 CHF to 150 CHF depending on length of use, lessons, and equipment hire. 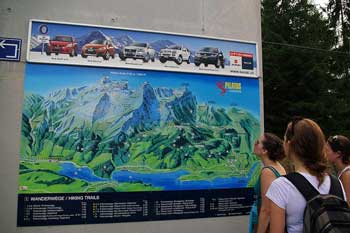 If Lucerne is what ultimately beckons your name, there are a number of things that can’t be missed. Firstly, the Chapel Bridge (Kapell Bridge) is the iconic wooden foot bridge that traverses the River Reuss. It was built in 1333 to defend the city and boasts more than 100 early 17th Century paintings that recount the origins and history of the city. Some added intrigue for Lucerne’s vivid history are Altstadt (Old Town), the Baroque Jesuit Church (JesuitenKirche) from the 17th Century, the Lion Monument which pays homage to the Swiss who died during the French Revolution, and a laundry list of local museums and galleries.

Once you’ve gotten your history lesson out of the way, you can take a dip in the outdoor swimming pool by Lake Lucerne for 6 CHF. There are also 13 golf resorts readily available in Lucerne for putters of all experience levels, bike hire for enthusiasts ready to tame the outdoor trails, and endless options for hiking through the mountains and along cascading waterfalls.

Naturally during the winter months skiing and snowboarding are prime activities. Lucerne has endless options for both (such as Ski Arena) with fares ranging from 37 CHF and up for single day to multi day passes.

Eating and drinking on a budget in Lucerne and Interlaken

There are a number of excellent eateries, diners, restaurants and exotic in-betweens for foodies and hungry travellers alike. It would be a shame to visit Switzerland without partaking of the most popular and most traditional of Swiss dishes: fondue. 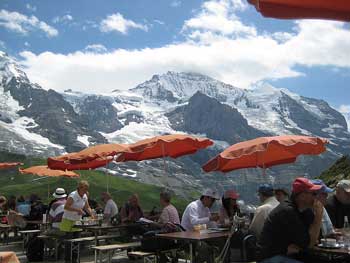 Fondue comes in a variety of incarnations including cheese and chocolate. In Interlaken the best option for getting a dish of chocolate fondue (as well as pizza, chicken schnitzel and sandwiches) is Bebbi’s.

For a traditional cheese fondue it’s not necessary to venture far from the slopes. Chalet Oberland offers inexpensive fare in that regard. For local brews try Riverside Bar set alongside the banks of the River Aare for cocktails and strong pints.

Or for something more earthy and rustic try the Metro Bar which is popular among backpackers at the local hostels. It’s famous for Rugen Beer and DJs spinning regularly.

When dining in Lucerne, tourists should be savvy. A number of the restaurants are fairly expensive. So it pays to know where to eat. The Waldstätterstrasse, Burgerstrasse, Europaplatz, Grabenstrasse, Kornmarkt and Unter Den areas have viable options for cheap and reasonable eats.

Some things to try: pear bread, wurst sausages, and veal. And Lucerne isn’t lacking for excellent bars either. The nightlife is brimming with a host of cocktail bars, rustic brew pubs and chic hotel bars that cater to all manner of punter.

Beers typically range between 6 and 8 CHF. Cocktails can get into the teens.

Akil Wingate is an American writer and singer-songwriter, explorer, foodie and fitness enthusiast based in Paris, France and Lausanne, Switzerland. He currently writes for numerous fashion, travel, health and fitness, and world news magazines. When he isn’t writing, composing or touring the world, he usually can be found in the kitchen whipping a challenging recipe into shape.

US to Europe roundtrip flights from US$564 in summer Best vacation destinations for Americans during COVID-19: Updated One-way flights are often half the round-trip price, with more flexibility World's cheapest beer, liquor, city, country, and hostel (are all in Asia) plus more shocking cheapies