Medical care while traveling can be amazingly cheap: A non-cautionary tale

Since this site mainly deals with the economics of travel, I thought I’d share a story that some people might find interesting about getting medical attention while abroad. We mostly hear horror stories of people getting hurt or sick on the road, and then (especially if they don’t have travel insurance) they end up in terrible shape and/or broke. This is the opposite kind of story.

I’m currently living temporarily in Chiang Mai, Thailand, which is the country’s second largest city, and the “capital of Northern Thailand.” It’s also one of the cheapest and best-value cities in the world for a traveler, as it’s fairly modern, interesting, and pleasant, while hotel rooms can literally be found for around US$5 per night.

Recently I’d developed a worrying symptom that I’d never experienced before, and I had little luck trying to diagnose the problem myself online. Eventually, in spite of having no insurance of any kind myself, I knew I had to seek proper medical attention for a real diagnosis.

Many options in Chiang Mai 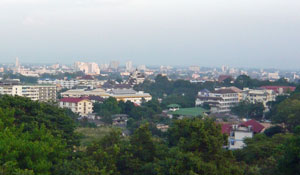 One of the things Chiang Mai is known for is medical tourism. There are many private hospitals here that mainly treat those who’ve flown in from expensive parts of the world for otherwise-costly treatments (ranging from heart surgery to plastic surgery). But I just needed a test or two done, and the closest and best place for me for a walk-in visit was the Chiang Mai University hospital.

Not much English is spoken in this city, and especially in my neighborhood near the university, so it was a big relief to discover that all the nurses and doctors in the 13th-floor walk-in clinic spoke decent to excellent English. If I’d had trouble communicating it might have meant having to make a future appointment at a private hospital, but everyone understood me and was extremely nice and helpful.

The care I received

After a short wait among a group of about 30 or so locals, I was given a urine test. About 30 minutes later I was called in to see a (young) doctor, who asked me about my symptoms and later disclosed that my test results showed no problems. He had a much-less-serious diagnosis for my problem, so I was relieved that a 2-week prescription should take care of things.

Then I asked about something related to the problem, so he said I could take a blood test for that one, and within an hour he could tell me the results. A nurse drew the blood, and almost an hour passed before he called me back in to reveal that everything there was normal as well, confirmed by the English-language print-out that he showed me.

It turns out I’m totally fine, and the specifics aren’t important anyway.

Up to this point I had no idea what any of this would cost me. When I filled out the form upon arrival I ticked the “cash” box for payment, and it was clear that I was either a tourist passing through or a non-citizen expat, so what would all of this cost?

Everything at this hospital is computerized, so all my data and results are in their system, and it took a few minutes for them to tot up my bill. They called me over to pay, and the girl announced that I owed them 1438 Thai baht, which is about US$48. To be honest, that was a bit more than I was expecting, but I also knew it was great value compared to almost anywhere else.

Then I looked more closely at the bill and discovered that most of that total was for the prescription itself. Everything else totaled about US$14.

Here's how it broke down:

(all billed in Thai baht, so I’m converting here)

The “medication” was 14 pills, which I picked up from the pharmacy downstairs after showing my receipt. At first I thought, at $2.36 each, the pills themselves might be a profit center for them, but when I got home I looked them up on the internet to discover that those online gray-market pharmacies charge about $4.50 per pill for the same thing. So in other words, I got this drug at cost, more than likely.

So the bottom line is that a urine test and a blood test cost me $4.30, while having the administrators enter me into the computer system and give me a hospital ID card cost $3.30, and two separate (short) consultations with a doctor cost $6.60.

Travel insurance or not?

For the piece of mind alone, some kind of travel insurance is a good idea for many, if not most, travelers. Especially if you plan on doing dangerous physical activities, it’s almost certainly worth it. A recent report said two-thirds of travel insurance claims involve vehicle accidents, and those can happen to almost anyone.

But on the other hand, this illustrates that the cost of healthcare outside the “Western world” can be shockingly low. Even if I’d broken a limb my total bill probably wouldn’t be more than $200 or so, and the staff and facilities in Chiang Mai seem more than adequate for the vast majority of situations.

My best guess is that this university hospital is subsidized by the government in order to be sure that locals have affordable healthcare options. And since 99% of the patients are locals, it’s not worth all the extra paperwork and layers of bureaucracy to issue health ID cards to make sure the few foreigners have to pay more.

7 Common mistakes to avoid when choosing a hostel Cheapest cruise lines for Alaskan cruises - 7 lines ranked by price 6 Great destinations with affordable and luxurious eco-resorts Is the New York CityPASS worth it? New York CityPASS review 2020