Japan is suddenly something of a travel bargain, with price examples

Anyone who has considered a trip to Japan in the last 5 years or so couldn’t help but notice that the most expensive country in Asia had gotten even worse. The Japanese yen, which had hovered between 100 and 120 to the US dollar for decades was now so strong that you’d get under 80 to the dollar, but in the past few months that trend has reversed. At press time you get almost 102 yen to the USD, which is more than 30% better than only nine months ago.

But there has been another trend worth pointing out going on at the same time, which is that Japan’s economy has been famously stagnant for over two decades now, and that has actually lead to deflation in some sectors, but mostly to overall flat prices. In other words, these combination of factors have made Japan more affordable now than it has been in a very long time. Below we’ll discuss some examples of common travel expenses to put it in better perspective.

Where Tokyo ranks in May 2013 against other “expensive” cities

Here at Price of Travel we rank every major tourist city using our Backpacker Index, which includes budget travel basics such as a hostel bed, food, drinks, attractions, and transportation for a day. Factoring current exchange rates, here is where Tokyo ranks with other major world cities:

As of summer 2012, Tokyo was up near Venice and Amsterdam but in May, 2013 it’s cheaper than Los Angeles and only a bit more expensive than Barcelona.

Before a first visit many budget travelers joke about staying in the famous capsule hotels to save money, but you might not have to.

Capsule hotels in popular locations start around US$30 per night.
Well-reviewed 3-star hotels in central areas like Shinjuku or Asakusa start at around US$65 per night and you’ll have many good choices under US$80 per night for two people.

Japan’s capital has dozens of popular backpacker hostels and prices for dorm beds are mostly US$20 to US$25 per night, even for the centrally located ones. That’s actually much cheaper than similar hostels in Paris or Amsterdam or New York City in 2013. 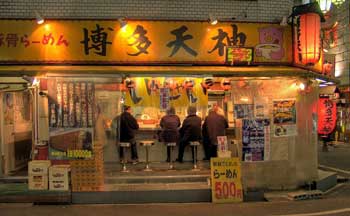 Long ago travelers would be scared off after hearing that “a hamburger in Tokyo costs US$20!” and while that was often true, a meal-size bowl of noodles and meat was only around US$4. Even today, you can easily get a filling and delicious meal at a neighborhood joint for between 500 and 1000 yen, which is between US$5 and US$10. And interestingly, a McDonald’s Big Mac is only 320 yen (US$3.15) right now, which is about a dollar cheaper than in the United States.

It’s important to note that Tokyo has thousands of expensive restaurants so spending US$30 or more on a meal is easy, but it also doesn’t take much effort to find ramen or donburi shops where most meals are well under US$10.

Beer, spirits, and even saki tend to be fairly expensive in hotel bars and nightclubs, starting at around US$5 per drink and going way up from there, but at least you can buy cheaply at mini-markets on every block, with cans of beer for US$2 or even less if you buy in bulk.

Tokyo taxis are still fairly expensive with a 3-kilometer ride costing around US$12, but the public transportation system is a great value with individual rides between US$1 and US$3 or an all-day pass for only around US$7.

Tokyo isn’t known for being super cheap with electronic devices though they are competitive with most of Asia. Weirdly though, Japan is the cheapest country in the world for Apple products. For example, right now you can get the newest iPad for 42,800 yen (US$420) and the iPad Mini for only 28,800 yen (US$283).

Japan remains the most expensive country in Asia, but it’s also amazing, friendly, spotless, and a rare combination of being futuristic and traditional at the same time. It’s also arguably cheap right now, at least compared to most of the other great tourist cities of the world.

18 South and Central American cities by price: Backpacker Index for 2022 English-only speakers: Travel everywhere anyway, here's why When is the best time to visit Italy? Here's how to decide Is the Go City Vienna Pass worth it? Go Vienna Explorer Pass 2022 review and prices