16 Cheapest Asia cities to fly into from the US

As more people from the United States and Canada come to realize the amazing travel bargains and opportunities all over Asia, more of us are going. One of the challenges is that it’s such a huge part of the world and there are so many very different options to select from. Especially if you are planning on visiting more than one country, it can be confusing where to start and where to end.

The good news is that most of the flights from the US and Canada are probably cheaper than you’d guess, at least as long as you know about typical international airfares. Even though part of Asia (India, specifically) is literally on the opposite side of the world from the US and Canada, fares are often cheaper than much shorter flights to Europe.

We decided to run tests to see which cities are the cheapest for round-trip flights starting in the United States, and the results are below.

How the test was run 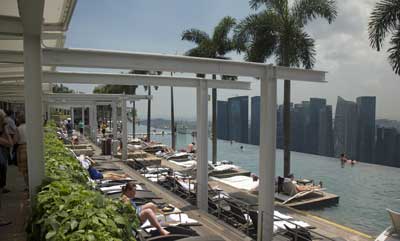 To keep it simple and meaningful, we checked airfares leaving Los Angeles International Airport into 16 large and popular airports all over Asia. We checked fares for a week-long stay in July, in October, and in December, and then averaged the totals to determine the order of the list.

The fares listed below are the cheapest round-trip flights for the dates we tested. If a lower fare was possible on a long and complicated itinerary that wouldn’t be worth the savings, it was discarded. In other words, the fares below are all on flights that most value-conscious travelers would be happy to book.

Los Angeles is used as a hub, but the order should be nearly identical no matter the starting point

There are some nonstop flights from a few major airports in the US and Canada, but Los Angeles is the most popular hub for North American flights to Asia. As a result, flights starting in other cities will usually be at least a bit more expensive, but the order of the destinations below should be very similar or identical.

Depending on your starting point, you might get the best fare with a change in Vancouver, Seattle, or San Francisco.

The cheapest cities in Asia once you arrive

Needless to say, getting a cheap flight into Asia is nice, but prices once you land are extremely varied. Click on the link below for our list of how much you should expect to pay per day in all major tourist cities of Asia.

16 Cheapest Asia cities to fly into from North America

Shanghai Pudong International Airport is the main international facility in this part of China, with many non-stop flights from major cities around the world. Most people fly into Shanghai to tour around China rather than tour around Asia, so it may not be an ideal hub for people exploring several countries.

Beijing Capital International Airport is the busiest airport in Asia and among the busiest in the world. It’s obviously an ideal hub for anyone touring China because Beijing is the most popular starting point.

Suvarnabhumi Airport is the new and main airport serving Bangkok, with abundant non-stop flights from major cities all over the world. The city of Bangkok itself is an excellent hub for trips all over Asia, although most of the cheapest flights go through Don Mueang International Airport, which is one of the main hubs of Air Asia.

Narita International Airport is the main international hub for Japan, even though it’s not even the busiest airport in Tokyo. Considering that Toyko is easily the closest major Asian city to North America, it’s a bit surprising that it’s so far down the affordability list. On the other hand, Tokyo remains as Asia’s most expensive city for tourists, still slightly ahead of Singapore.

Incheon International Airport is the main international airport serving Seoul, and this is another that always gets rave reviews from passengers. Unfortunately, Seoul is quite remote among major Asian destinations, so it’s much better for a stopover coming or going rather than a base for a tour around Asia.

Tan Son Nhat International Airport is Vietnam’s busiest airport and the main hub serving Ho Chi Minh City (commonly still known as Saigon). Especially since fares tend to be on the high side, it’s probably not a great choice for a hub to start a tour around Asia.

Hong Kong International Airport almost always has the best fares for those starting in the US or Canada, and it also makes an excellent starting point and/or hub for a trip deeper into Asia. The city is extremely modern in many places, yet quite exotic in many others, and most people you encounter will speak English. This is Cathay Pacific’s busy main hub, and one of the world’s highest rated airport facilities as well.

Noi Bai International Airport is the major international facility for Hanoi, which is in the far north of Vietnam. Even though it has a fairly central location, this is really best for starting tours of Vietnam heading south to Ho Chi Minh City, and not an ideal hub for much else. Hanoi itself is fascinating and amazingly cheap, by the way.

Ninoy Aquino International Airport in Manila is obviously an ideal hub for trips to the Philippines, including the wonderful resort island of Boracay. But it’s probably not a great choice for people who are going to be touring around Asia by air. The city of Manila itself is known as a bit of a disappointment compared to most of the others on this list.

Singapore Changi Airport deserves its reputation as the favorite airport of nearly every traveler who passes through, so it’s a shame that longhaul flights from North America tend to be pricey. The city itself is wonderful, if crowded and a bit expensive. Better still, there are many low-cost carriers flying into Singapore, so it’s an ideal hub to explore other cities on this list.

Taoyuan International Airport is the main international airport serving Taiwan, and it’s served by nearly every larger airline in Asia and many from North America and Europe. Taiwan itself is sometimes a forgotten destination, so the cheap flights should be enough to encourage more people to visit and use it as an incoming hub for Asia.

Ngurah Rai International Airport in Bali’s capital city of Denpasar, and it has really good connections from within Asia, but very few longhaul flights from anywhere else. Bali also has a surprising number of cheap flights from other cities on this list, so it’s quite easy to do a cheap stop on the island as part of a larger trip.

Kuala Lumpur International Airport has a lot in common with the Singapore Airport (above), except that the airport itself isn’t special enough to inspire songs and poems. Still, Kuala Lumpur is an underrated city and it makes a perfect hub for those wanting to also head almost anywhere else on this list.

Chhatrapati Shivaji International Airport is on the other side of the earth from North America, so it’s not surprising that it’s one of the more expensive places to fly directly into. And being on an edge of the touristy part of Asia, it’s not an ideal hub for anything except trips within India itself.

Indira Gandhi International Airport is a new and pleasantly modern facility, so it makes for a perfect starting point for those about to tour around India. It’s also a base for quite a few low-cost airlines, although not all of them have the kind of solid reputation you’d like.

Bandaranaike International Airport is the primary airport for Sri Lanka, and it feels like a trip back in time compared to pretty much every other facility on this list. Sri Lanka itself is an excellent and upcoming destination, so it’s unfortunate that longhaul flights in are as expensive as they are.