iPad prices in 39 countries around the world: iPad Air 2, iPad mini 3 and more

Apple has just announced the new batch of iPads along with some other updates, and they are launching them in late October, 2014 in most of the world at the same time. As we’ve done in the past, we checked the prices in all the Apple online stores around the world and converted them into US dollars for instant comparison.

If you haven’t researched this in the past you might assume that prices are lowest in countries with lower average incomes, but Apple is like most other companies in that they don’t really discount anywhere. So as before, the cheapest iPad Air 2s and iPad Mini 3s can be found in the United States (at least in states with no sales tax). Canada joins several Asian countries as next cheapest, while Europe has most of the most expensive iPads in the world.

Note: This article was originally published in 2012, and has been updated each year after the new iPad announcements. The data below is from the October, 2014 Apple announcement, and reflects exchange rates at that time.

39 countries ranked from cheapest iPads to most expensive

This year we’ve split the chart into two sections, with the top 29 on the list being the countries where the new iPad Air 2 and iPad Mini 3 will be on sale in November. The section below is for countries that have yet to announce these new products, but are still selling older versions. Note that Malaysia continues to actually have the cheapest iPad Mini.

All the prices below are direct from the Apple online stores for each of the 39 countries they have them for, and converted into US dollars at today’s official exchange rates. Prices listed are all for the base 16GB model with Wi-Fi only. 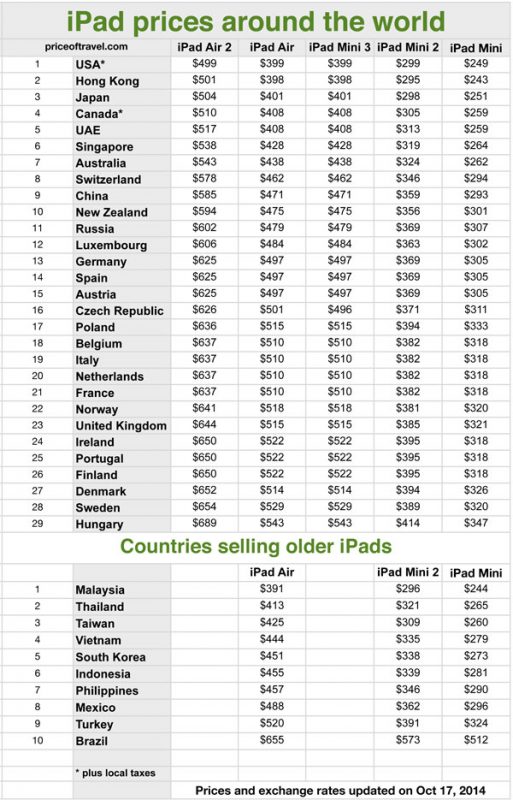 Prices as of October, 2014, and converted into US dollars

Tax included in most of the world 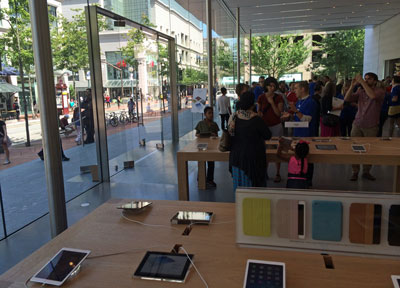 As most people seem to know, prices in the United States and Canada are quoted without local taxes, which can range from 0(zero) in many US states, up to around 15% in some Canadian provinces. In the United States there are quite a few states that have no sales tax at all, while in Canada there is a minimum 5% federal tax, so that amount has been included in the prices above. Some provinces don’t add anything more, while others add a lot more.

To the best of my knowledge, every other country lists its prices inclusive of sales or value added taxes. Please let me know if there are any exceptions on the list.

Hungary is the most expensive of the countries with new models 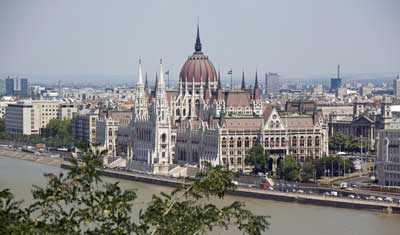 Just as with the 2013 list, Hungary is the most expensive of all the countries selling the newest models. It’s strange to see them adding even more tax than Sweden, Norway, and the other Nordic countries.

By the way, Switzerland is also a famously expensive country, yet they have the lowest VAT in all of Europe, so their iPads and other Apple devices are actually the cheapest on the continent.

Brazil is by far the most expensive in general

As with the previous survey combining several Apple products, Brazil is by far the most expensive for iPads alone. Worse still, you can’t get the new models in Brazil yet, so it’s the older models that still cost a fortune. I’ve been told that this is mostly due to the extremely high import duty on foreign technology.

Europe prices are about 25% higher than the US or Canada

As you can see on the chart, the VAT-inclusive prices for Europe are about 25 to 30% higher than the tax-excluded prices for the US and Canada, so the difference is closer to 20%, which is almost entirely explained by the higher sales tax rates throughout Europe. Luxembourg is the cheapest country in the Eurozone to buy iPads, reflecting its 15% VAT rate, compared to around 20% or more in most of the continent.

24 Cheap destinations in 2022 with great weather in September Hoi An, Vietnam: Visiting this beautiful city on the cheap My favorite travel gear: Pro tips for backpacks and accessories Things to do in Grand Bahama: Best excursions, attractions, beaches, fishing, shopping