Once upon a time, a visit to Buenos Aires visit with a side trip to Colonia, topped many a budget traveler’s bucket list. Then, the evil inflation monster came along and tipped the bucket.

While jaded journeyers bemoan the cheap South America of yesteryear, intrepid travelers discover new ways to explore these two countries. Argentina and Uruguay might feel a bit on the expensive side for South America, but on an international level they are both still filled with bargains for those who know where to look for them.

Inflation in Argentina and Uruguay

In Uruguay, inflation figures for the past year have ranged between 7 and 9.18 percent. Argentina experienced a whopping 35 percent inflation rate.

Although this represents a dramatic change for the former budget travel destinations, given that the pre-inflation prices were extremely low, you can still find reasonable bargains in both countries.

Why Buenos Aires and Uruguay?

Buenos Aires is a city. Uruguay is a nation, but comparable in size to Washington State. A ferry ride connects them, but the two countries differ in ambiance and political climate. 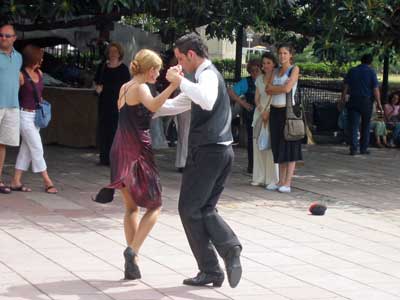 Jose Mujica, known as the world’s poorest president, made Uruguay one of the few places in the world where you can smoke pot at a gay wedding. Meanwhile, in Buenos Aires, many liken the stylish President Cristina Fernández to Eva Perón. Detractors balk at the comparison.

Thanks to their quirky, controversial and iconoclastic leaders, these cultures fascinate professional and self-proclaimed “modern day anthropologists.”

Types of vacations on a budget

Those who complain about the rising travel costs to Uruguay and Argentina are often attempting to replicate their Miami and Caribbean vacation styles. While both countries have beautiful beaches, enjoying them means traveling from December through February, when prices soar with the thermometer.

Temperature drops equate to price drops in airfare and hotels. It’s a bit chilly during the early spring, fall and winter months, but the cool air makes it easier to walk around the towns and cities.

Tourists are usually conspicuous by their absence during these seasons. This makes it easier to converse with the locals.

LAN Airlines often has special fares, so get on their email list. If you have frequent flyer miles with American Airlines – now a LAN Airlines partner, take advantage of their Miles Saver Awards from March 1 – May 31 and August 16 – November 30.

When factoring in the entire cost of your trip, remember to add the $160 reciprocity fee required by Argentina.

Inflation has not yet swallowed the hostels and budget hotels of Buenos Aires. Many of the so-called hostels even offer rooms with private baths. These cheap sleeps are also intriguing venues in their own right.

All of the rooms in the avant-garde Art Factory hostel have murals created by artists from all parts of the globe. Located within the San Telmo district, the hotel offers private rooms for about US$45 a night, and dorm room lodging for about US$10 a night. If you are an artist, and you want to decorate one of the walls, you can exchange your services for a free night.

Located in the Palermo neighborhood, the eco-friendly Eco Pampa Palermo hotel and hostel offers dormitory-style rooms starting at about $11 a night, and rooms with private bath for about $65 a night.

Luba, owner of Luba Tango Guest House, adds a personal touch to her establishment. Rooms with private bath are US$35 a night. Optional services include Spanish lessons, tango lessons and shopping tours.

Free things to do in Buenos Aires

You don’t have to spend a fortune in Buenos Aires. Check out these free activities.

The guides at Buenos Aires Free Tour offer daily city tours at 11:00 a.m. These enthusiastic, English-speaking local guides animate the city’s history and culture of Buenos Aires. Your excursion includes a stop at the 1858 Cafe Tortoni. At 5:00 p.m., the guides offer a free “Aristocratic Tour,” which visits sites like the Recoleta Cemetery, which houses Evita’s tomb, Plaza San Martin and the Basílica Nuestra Señora del Pilar.

The big clubs and theaters try to lure tourists with expensive tango dinner shows. Save your money and opt for the free street tango. Locations include the corner of calle Florida and Cordoba, Plaza Francia in the Recoleta district, Caminito in La Boca, San Telmo in the Calle Defensa and Mataderos in the markets. 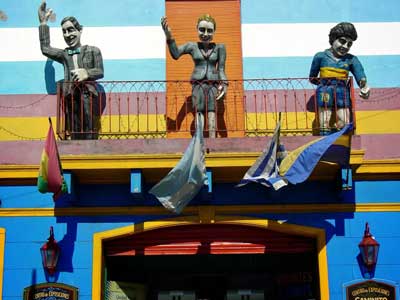 The early 20th century brought immigrants from the port city of Genoa, Italy to the port city of Buenos Aires. They found work in the ports of La Boca district, constructed their homes from discarded shipyard materials, and painted the exteriors with leftover shipyard paint. This explains the brightly colored houses of La Boca neighborhood.

This small street serves as an open air museum in La Boca. Statues and bas reliefs – some a bit kitsch – ornament the windows and porches of the houses. A graphic style called fileteado embellishes the building plaques. Slants, curves, flowers, symbolic animals and poetry characterize this elaborate style.

This free night at the museums of Buenos Aires takes place in November, and you don’t have to be a museum person to enjoy the revelry. The event features museum street theater, music and dance, and ends with a 3:00 am party near Puerto Madero.

Buenos Aires boasts over 200 bookstores, 70 libraries, and an abundance of book-selling kiosks. In 2011, UNESCO named it the World Book Capital. El Ateneo Grand Splendid – located at Santa Fe 1860 — embodies what reading symbolizes in Porteño culture. In its past life, the elaborate building was a 1,050 seat theater. Opened in 1919, Carlos Gardel and other legendary performers graced its stage. In 2000, it was reborn as one of the most beautiful bookstores in the world. The stage, with its red velvet curtain, now houses the Impresso Cafe. 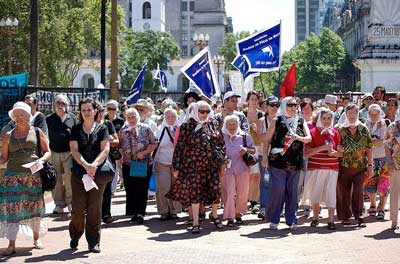 Buenos Aires is often the site of some sort of political demonstration. Cacerolazo is a typically South American form of protest, which involves banging of pots, pans and utensils. On Thursdays at 3:00 p.m. the “Madres de Plaza de Mayo” gather and circle the square’s May Pyramid monument.

In the 1970’s, Argentina went through a period of military dictatorship. During this time, over 30,000 people went missing. Since that time, these women have been asking about their children’s whereabouts. Their symbol, a white cotton diaper, is painted onto the cement in the plaza. Some of the women tie white scarves around their heads. 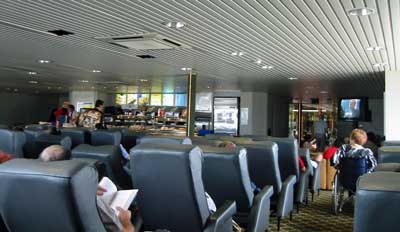 The ferry is the cheapest way to get from Buenos Aires to Uruguay. Three companies perform this service:

All of these companies offer packages that include hotel, plus transportation to other cities. The ferries stop at either Montevideo or Colonia, but you can get almost anywhere in Uruguay by bus. 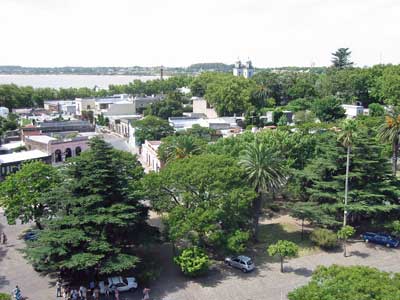 Founded in 1680, Colonia Del Sacramento began life as a Portuguese fortress city and smuggling port. In the centuries that followed, this remote colony changed hands from crown to crown, as it fell under the rule of Spain, Portugal and Brazil. Colonia won its independence in 1828, and was designated as a UNESCO World Heritage Site in the 1990s.

This tiny town has eight museums. Although entrance fees are cheap, you’ll get a better sense of Colonia by wandering through the cobblestone streets, photographing the old houses, visiting the outdoor crafts fairs and marveling at the well preserved vintage cars.

Walk across the drawbridge and travel back in time. If you decide to stay overnight, El Viajero offers both dormitory style and private rooms at reasonable rates. Private rooms start at US$59, and dorm rooms at US$17.

While budget lodging is relatively easy to find, dining in Colonia is surprisingly expensive. Ignore the trendy restaurants, and eat like a local at the chivito stands. 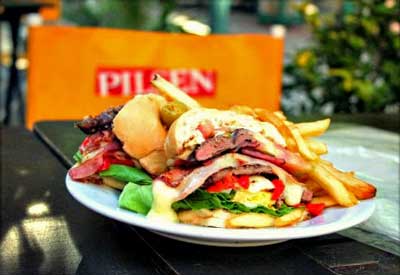 The chivito, a Uruguayan tradition, consists of thinly sliced beef, mayo, hard boiled eggs, olives, cheese, tomatoes and bacon. It’s served on a bun, along with a generous portion of french fries.

Eat one for lunch, and you’re set for the rest of the day. Los Farilitos (General Flores 272 y Barbot) is a chivito stand with outdoor seating. 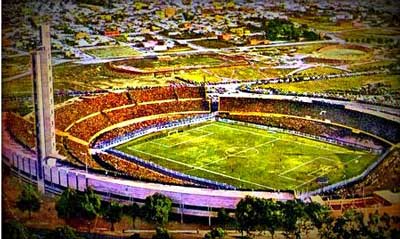 As FIFA fever spreads throughout the world, some people might pay a pilgrimage to Montevideo’s Estadio Centenario. Built in 1933, it hosted the first World Cup event. In fact, World Cup history was made here.

Although the city lacks the immediate “wow factor” that enthralls visitors to Buenos Aires, it’s still worth a visit. Montevideo is, however, a bit of a maze, so use this handy site for navigation. 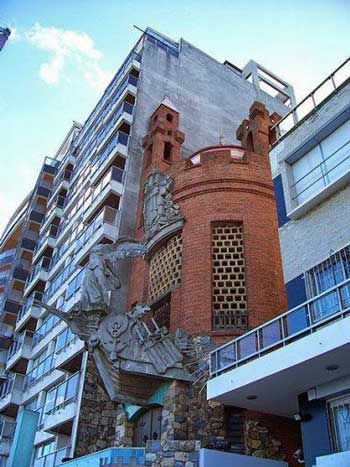 There’s a trick to appreciating Montevideo: Look up and prepare for serendipity. The storefronts are boring and decrepit. The upper stories feature elaborate, intriguing architecture.

Case in point: Castillo Pittamiglio. Ultra-modern high-rises line the Montevideo rambla. Then suddenly, there’s a 1911 castle, whose exterior features a statue of a ship, along with Masonic symbols and representations of alchemy.

Nearby, you’ll find the enormous Puenta Carretas Shopping Mall. During the 1970’s, the building housed a prison for political dissidents. It’s most notorious prisoner: the current President Mujica! 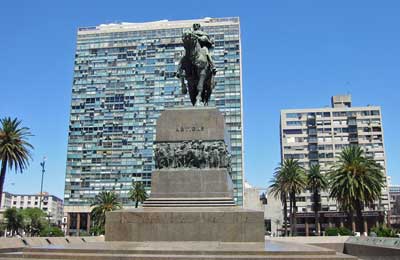 Take a free walking tour of the city. These tours leave from Plaza Independencia, Monday through Friday at 11am and Saturday at 2pm. The guides speak English. This is their passion, so tip them well! Plaza Independencia is also known for its street musicians and outdoor merchants of crafts and antique items.

Meander through the old city. Winding streets and alleys take you past a blend of colonial, art deco and art nouveau architecture. Known as Ciudad Vieja its key feature is Mercado del Puerto, which travel writer Anthony Boudain describes as a “meatopia.” Don’t eat meat? Don’t fret. You will find other options. The food is neither cheap, nor overwhelmingly expensive. Look at the prices on the bulletin boards, and find your best option. If you’re on a super tight budget, head to the kiosks for a cheap chivoto.

Ukulele Hostel: Boasting a swimming pool, a music room and a bar that stays open until 1:00 a.m., this is one of the hippest hostels in Montevideo. It features private and dormitory style rooms, with rates under $100 – even in high season. The Ukelele Hostel sits near the Barrio Sur, where candombe, and Afro-Uruguayan music style, emerged. If you’re lucky, you might even hear the musicians practicing in the street.

Caballo Loco Hostel: With a modern interior and the wackiest modern art murals on the wall, everything about this place spells “fun!” Rates start at $19 per night.

Buenos Aires has always been a major travel destination. Uruguay, not so much. When news about this little country goes viral, that will change, and prices will rise. Visit while it’s still somewhat affordable!

Lisa Marie Mercer is the author of Breckenridge: A Guide to the Sights and Slopes of Summit County. After years of working in ski country, she and her husband decided on a change of environment. They now live in coastal Uruguay, where they produce the UruguayExpat.info blog.

Iceland: How much things cost & how to visit on a low budget Tips for a budget campervan trip around the USA Best Montego Bay all-inclusive resorts for couples, families, nightlife & more Negril: Why it might be the best Caribbean destination for you