Should you buy European train tickets in advance: Yes, and here’s how to save

About a million years ago, buying train tickets for your European trip was very easy and straightforward because they all had fixed prices that were reasonable so you could buy your ticket just before the train departed. Then in the early 2000s, that all changed as countries started introducing “dynamic pricing” similar to airlines and suddenly tickets generally started out cheap and went up in price as the departure date drew near.

Now as of 2022, nearly all international train tickets and most domestic European train tickets are sold this way and buying tickets on departure day is usually insanely expensive. Below we will go over what you need to know to save the most on buying train tickets for your Europe trip, and where to buy them as well. One very nice thing is that you can usually download them instantly these days and not have to pay a delivery charge, but there’s more to the story below. 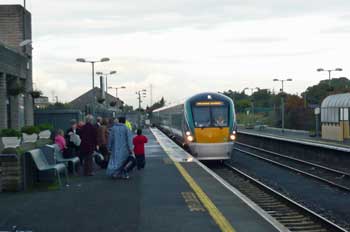 Britain has used a dynamic pricing system on its train lines ever since they privatized them, and the Eurostar from London to Paris or Brussels has long done the same. As of 2022 it seems that every country in Europe has train fares that keep getting more expensive as the travel day nears.

Most suburban/commuter trains continue to have fixed fares that are always pretty reasonable, but on the long distance trains between major cities, you now have to buy early.

International train fares within Europe all seem to have this dynamic pricing where the fare goes up as the date approaches and more tickets are sold. However, some countries including Switzerland and the Scandinavian countries have fixed domestic fares that can be reasonable if bought on travel day. However, they also have “super saver” fares on some routes where they offer very cheap tickets if you buy far enough in advance.

When to buy European train tickets to get the best fare 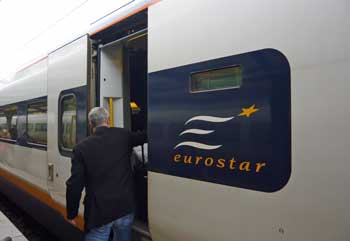 The short answer to the question just above is, “as early as possible.” But that’s easier said than done. For one thing, very few of us are willing to lock in a specific non-refundable train ticket close to 6 months in advance. Most people who are putting together their European itinerary tend to only start the detailed planning a few months in advance at most.

The good news is that you can generally get a decent discount on the full fare if you buy at least a month in advance. And booking a week in advance is almost always cheaper than booking on travel day. You can buy most European train tickets online from anywhere, so it all comes down to how early you are able to commit to a non-refundable ticket in order to save money.

Bottom line: One month in advance will usually get a good fare 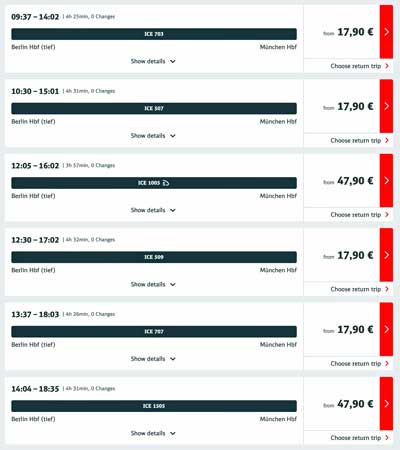 You’ll also usually notice advance fares can be drastically different from one departure to another the longer in advance you look. For example, to the right you’ll see all of the 9 AM to 3 PM departures from Berlin to Munich on a day a little over three months from now. Of the six departures, the two fastest ones (just under 4 hours) are currently priced at €47.90 in 2nd class, while the four slightly slower (around 4.5 hours) departures are still priced at €17.90.

This sort of things is very common as each departure only has a certain number of ultra-cheap tickets on offer and then the price jumps up quite a bit. On this day the two faster trains are sold out of the ultra-cheap tickets, while they are still available for the slightly slower trains. It’s easy to save quite a bit of money when you see situations like this far enough in advance.

Is a Eurail Pass a better option now?

About 10 years ago, these same European rail companies (mostly run by the government of each country) started requiring a seat reservation when using a Eurail Pass on the popular city-to-city train routes. This means that instead of just hopping on any train about to leave the station, pass holders now had to pay about €5 to €10 for a seat reservation if a seat was even available. Suddenly, a Eurail Pass was less fun, or at least less spontaneous than before.

But the reason they started charging for these seat reservations is so they could also adjust the price of the seats and know how many are available. The net result is that paying as you go while trying to decide on trains at the last minute is now insanely expensive. A Eurail Pass will rarely seem “cheap” but it does provide you with much more flexibility and freedom at a reasonable price compared to paying as you go.

Your two cheap options: Buy at least a month early, or get a rail pass

Obviously it depends on exactly where in Europe you intend on taking the train, but for most people there are only two cheap options, each with its own advantages.

If you are willing and able to lock in all your rail travel at least a month early, you can still travel around the continent at a reasonable price. Waiting until just a day or two before you want to go can lead to astonishing prices in some cases.

Option 2: Buy a rail pass and travel as you please

Again, a Eurail Pass usually doesn’t look cheap at first glance. You’ll often end up paying around US$60 per ride in addition to about US$7 for a seat reservation. But only rides of 3 hours or less will cost that little on travel day, and they can be as high as US$200 or even more in some countries. A US$67 ride on a rail pass becomes a pretty good deal in comparison.

The 2022 Eurail Passes seem to be quite a bit lower than they had been in 2020, which is probably due to lower ridership during the pandemic. Hopefully these same prices hold up in 2023 because they can be much cheaper than even buying tickets in advance at these prices.

There are two basic options when it comes to purchasing advanced train tickets for European trains: 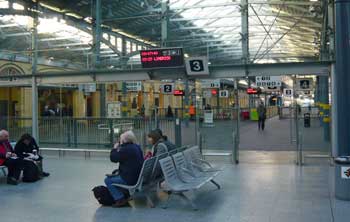 One complication with buying European train tickets online is that some countries have very confusing websites and generally make it difficult for tourists. They offer the best fares though, so for most of it it’s worth a try to see if we can pull it off on our own.

The easiest website to use is raileurope.com, which represents a company that has been in business for many decades and is primarily owned by the France and Switzerland rail companies. They usually charge about 20% more than the country sites, and sometimes it can be higher. But they are also easy to use now in 2022 you buy download tickets instantly for no delivery charge. This used to be a headache but now it couldn’t be easier.
>>>Check raileurope.com for train fares

As mentioned, it’s worth trying the official rail websites to save money. Most of them can be switched to the English language for the whole transaction, although some of them turn back into their native language for the last few steps, which can be aggravating and confusing. You’ll usually be able to have the tickets shipped to your home for an extra fee, and some of them also offer printable e-tickets.

If you are going between countries you can buy the ticket from the rail company of either country, and they should be the same price. The German rail site also sells tickets on some trips that don’t involve Germany, and they are usually the best for checking fares and schedules for anywhere in Europe.

How early do European train tickets go on sale?

The last piece of the puzzle, which makes things even a bit more confusing, is that each country starts selling its train tickets a different amount of time in advance. It can be as little as 1 month ahead of time in Switzerland or Belgium, up to 6 months ahead of time in some other countries.

Here are the main ones that should cover most of us: