Taking a cheap cooking lesson in Hoi An, Vietnam

More than anything, Hoi An is known for its 200-odd tailor shops that nearly blanket this small town, but it’s also known as one of the best food destinations in Asia, and among the best places to take a cooking class. With no room in my backpack for a cheap new suit, I was far more interested in the food as well as learning some of its secrets.

When I arrived in Hoi An, I’d read that at least a few places offered classes for making popular Vietnamese dishes, but I was surprised that it seems that well over half the restaurants in town offer a cooking lesson of one kind or another. Some seem to give them at set times and days, but most of them just seem to vaguely offer them and will set them up once you inquire.

After doing quite a bit of research I discovered that the better advertised and better organized classes were either half a day or a full day. Some include a stop at the local market to actually buy the ingredients, and that sounds cool but the market itself is one of the big tourist attractions in Hoi An so this extra step isn’t as special as you might think. If you come to Hoi An you’ll wander through the market at least once yourself, and it’s not like you need to learn how to haggle for garlic and lemongrass at the supermarket back home. 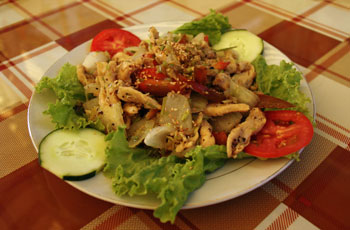 The problem for me, and for many budget travelers, is that these 4-hour+ cooking classes seem to start at US$25 and go way up from there. While $25 might not sound like much to many people, consider that you can get a comfortable and modern hotel room in Hoi An for around $10 to $15 per night, and that amazing meals are around $2 to $3 even in somewhat fancy restaurants, and that you can get cold beer for 16 cents per glass.

This town has plenty of well-heeled visitors so those expensive classes seem to do well, and in fact I’ve also heard that some of them have such a large class size that it’s more like a lecture (or watching a cooking show) rather than hands-on instruction.

Cheap cooking lessons based around the menu of your choice

So it turns out that if you are on a backpacker’s budget then you can still take a cooking class at a price that won’t cut two days off the end of your trip. Many of the restaurants in town allow you to pick items off the menu and then will create a lesson based around you actually preparing those yourself, and then of course you get to eat the product of your labor. 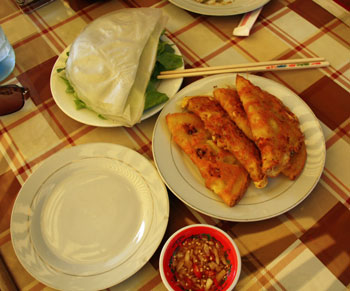 I’d read that at least one place charges only $2 extra for the cooking lesson part, and that sounded like suspiciously little to me, but many things in this wonderful (and touristy) town are ridiculously cheap so perhaps it’s legit? After spending two weeks in Hoi An myself in early 2010 I noticed a sign at my favorite restaurant here, called Café 43, that offers these lessons for $5 plus the menu cost of the food. Without hesitation, I signed up. After having done it I’d imagine that you can get a similar experience at many different restaurants in Hoi An, although I can only give my opinion of this one.

It’s already a great deal, but the thing about Café 43 is it’s like a cult. I discovered it around the corner from my $10/night hotel on my second day here and I’ve literally eaten there about 10 times since then. The food all over this city is really good, but this place is amazing. And if I had any doubts about my own opinion I noticed many of the same people eating there each day. Tourists would joke with each other about how they can’t help but keep coming back because everything is so good and amazingly cheap too. The 3,000-dong (16 cents) ice-cold glasses of “fresh beer” are enough to get people to sit down, but it’s the sensational food in abundant portions that keeps people coming back.

For better or for worse, the secret on Café 43 is out. It’s featured as a top pick in Lonely Planet and it’s also currently #2 out of 69 restaurants in Hoi An on TripAdvisor. Read the reviews there and you’ll see what I’m talking about. In other words, this place tends to get busy, so you can’t have a lesson at 6pm and eat your meal at 7pm because they are packed.

The man who runs the place (who seemed like a friend by this point) told me I’d have to come in around 3 or 4pm, but when I tried to actually schedule one day he asked if I could do it at 10am instead, since evidently this is the quietest time of day for them. Pretty much all restaurants in Hoi An, including Café 43, are open for breakfast and then they stay open all day and well into the night, by the way.

Still not sure what to expect

Since I’d never taken a cooking class before, much less a private one, I still had no idea what it would be like. The place is basically one big covered patio and the kitchen is in a small and dark brick building in the back.

As far as I could see it isn’t really set up well for public classes, so I was relieved to see that the instructor (who is also the head chef and married to the guy running the front) had already prepared a table with all the ingredients for the dishes I’d chosen. Also on the table was a portable gas burner, and it was all set up in the back of the main patio area. It’s a lovely setting and it allows you to concentrate on your dishes alone instead of feeling like an obstacle in the main kitchen itself. 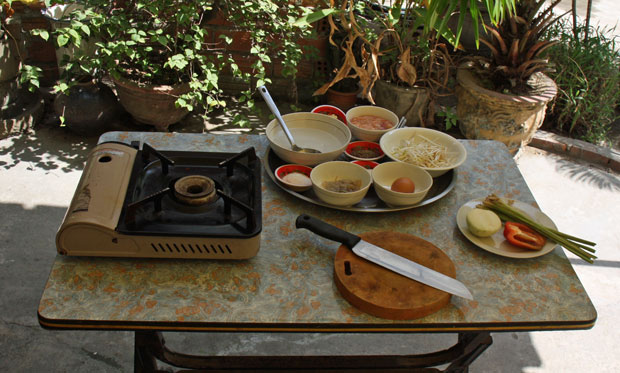 The night before I told her I wanted to make:

I’d had both of those things a few times before and they were obviously among my favorites. The chicken dish seemed fairly straightforward on the plate, but the Vietnamese shrimp pancake was as mysterious as it was delicious.

Not only is everything laid out and prepared for the lesson to begin when you arrive, but my instructor also helpfully provided me with a pad of paper and a pen so I could write down notes and the recipe as we went. Though her English is minimal, she was friendly and able to communicate everything I needed to know. 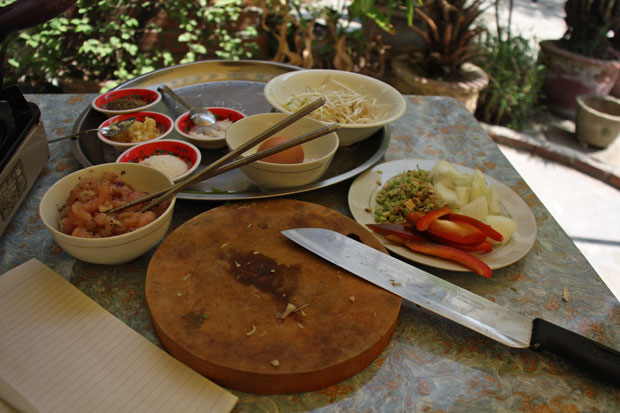 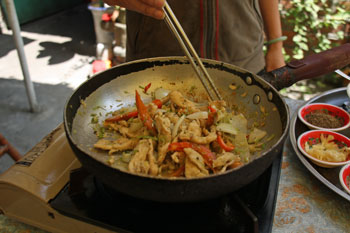 She began by finely chopping a few lemongrass stalks, and then she handed the knife to me to chop the rest. The rest of this dish pretty much the same way. She’d show me the quantity of the ingredient and make sure I understood what it was, and then I’d do most of the chopping, mixing, and stir-frying after that.

I completed the dish mostly on my own and I also had time to write down the recipe and instructions.

Interestingly enough, she suggested I eat the lemongrass chili chicken (second photo from the top) right then, before it got cold, so I did and she toddled into the kitchen to do her normal work for 15 minutes or so until I had finished. 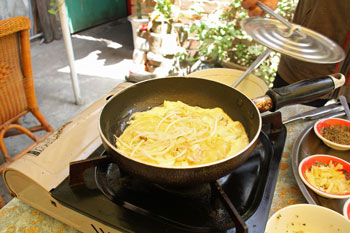 The process for the Vietnamese shrimp pancakes was basically the same, except this time she made the first one herself and then supervised while I made the other three. A normal order comes with only three of these things so I guess we made an extra large batch.

I’m a pretty good cook at home already, but still this was very interesting to see these authentic and fairly complicated dishes made in their natural setting, right in front of me, with me actually doing most of the cooking. The whole thing took maybe 90 minutes from start to finish, and the food tasted exactly as good as it did when I’d ordered it there previously. 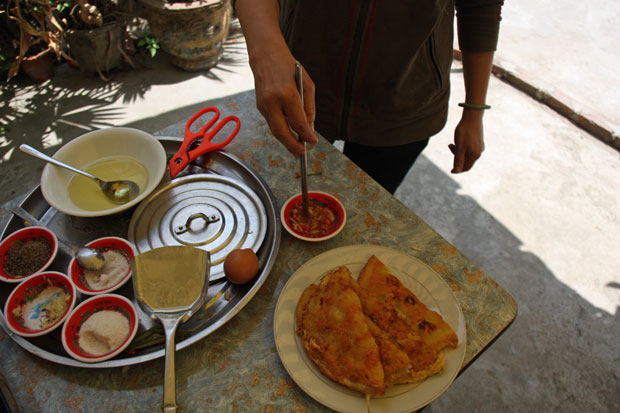 When you have the exact right ingredients and equipment it’s not hard to make great food, though I have a feeling when I try it at home in the future these dishes will look and taste almost nothing like what I made here today.

And yeah, the experience was priceless.

The $5 price is per person, I’ve been informed, but that’s still a great deal for something very unique and informative.

Additional notes on the pancake thingee

The Vietnamese pancake (third photo from the top) is made with rice flour batter poured over grilled shrimp with bean sprouts added a bit later. When it’s served to you it’s more like a fried shrimp taco, and you also get an excellent dipping sauce, sheets of rice paper, and a big pile of fresh greens along with it.

The correct way to eat it is to hold the pancake in a couple sheets of rice paper, then open it up and stuff it with greens, and then roll it up as tightly as possible before dipping it in the sauce. If you can excuse a bit of vegetable oil used in the cooking process, it’s really healthy, amazingly good, and quite filling. I have a big appetite and I had to take the last two with me in a take-away box.

This place is a bit off the beaten path. It’s in a quiet mostly residential neighborhood that’s about a 10-minute walk from the historic old town area. There are several really nice hotels right in this same neighborhood and it’s actually a pleasant area to stay in since there are a few other great restaurants here plus you don’t get hassled by cyclo and motorbike taxi drivers at all.

If you are just coming for a meal and if Cafe 43 is busy, or even if it’s not, you should also check out Sun Shine Cafe directly across from it, as well as Day and Night next to that one. Both of those are really good restaurants as well and you will probably get faster service and more comfortable chairs as well.

25 Cheap destinations for 2022 with great weather in January 5 Reasons the best beer is the cheap local one London Explorer Pass 2020: We review prices and value here Price of a 5-kilometer Uber ride in 67 cities around the world