Patagonia on a budget: Here’s how to do it

The snow-capped peaks, crystal clear lakes and alpine meadows of Patagonia make it one of the undoubted highlights of South America. Unfortunately, its location in two of the continent’s more expensive countries (Chile and Argentina) and the often vast distances involved in travel here, conspire to make it among the more expensive destinations as well.

However, the thrifty traveller can always find a way to cut down on costs, and here we look at a few ways you can enjoy everything Patagonia has to offer without blowing your budget.

Argentine Patagonia or Chilean Patagonia? Or both? 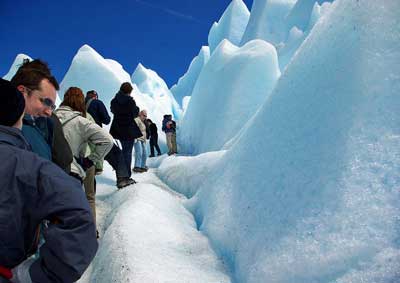 Definitions of exactly the northern and southern boundaries of Patagonia vary, but all accounts agree that the area is split down the middle by the Andes mountains. The mountains also form the modern border between Chile and Argentina but this seemingly enormous natural barrier is surprisingly porous, and on your travels you will often find that not only the landscapes but also the people and cultures on both sides of the border often have more in common with each other than they do with their fellow-countrymen in Buenos Aires or Santiago.

On both sides the sparse population, often extreme climate, and sheer distance from the rest of the world have bred a sense of toughness and self-reliance, and experiencing that frontier spirit is often as much part of travel in Patagonia as is enjoying the spectacular scenery.

Should you make sure you see both sides of Patagonia? Unless time or budget pressures dictate otherwise, then you should certainly do your best to see Patagonia from both the Chilean and Argentine sides of the border. Each offers something different, and travel between the two isn’t arduous and needn’t be overly expensive.

Argentine Patagonia in a nutshell 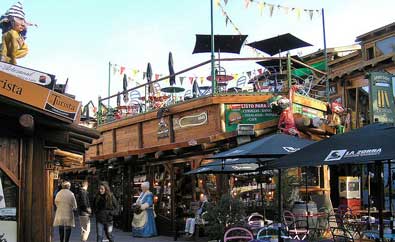 The main base for exploring the Argentine side of Patagonia is the small town of El Calafate. Thirty years ago, this small town of around 25,000 people had a population more like 2,500, which gives you some idea of how it has grown, and the growth is almost entirely due to Patagonia’s burgeoning tourist industry.

The good news is that this means a good amount of competition in terms of accommodation and other tourist services, and consequently prices that are pretty close to the Argentina average – this seems pretty fair when you consider that everything has to be brought down here to the end of the earth before you can buy it.

Getting to Argentine Patagonia

The quickest way to get to El Calafate is to fly in, and there are daily flights from Buenos Aires, Ushuaia (for Tierra del Fuego) and Bariloche (for the Lake District) with prices varying between $250-450 one way. Much cheaper are Argentina’s excellent and comfortable long-distance coaches, but the journey times are likely to put off anyone at all concerned by time.

What to see and do in Argentine Patagonia 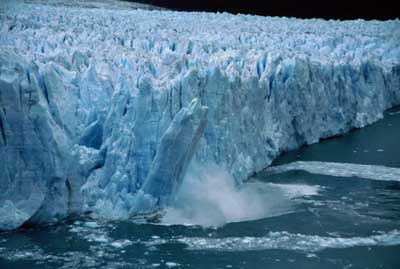 The (literally) big attraction on this side of the border is the colossal Perito Moreno glacier. This enormous river of ice has a front ‘wall’ which is a mammoth 5km across and up to 70m high, and you can actually hear the ice creaking and cracking. If you’re lucky you’ll actually get to see a huge chunk of ice calve from the glacier and fall into the lake in front of the glacier, which is really impressive.

Most people take tours organised by hotels and travel companies, but these usually cost around US$60 per person, not including the Glaciers National Park fee of US$25. By contrast, if there are two or more of you, a taxi to and from the glacier from El Calafate will only set you back around US$30 per person so unless you feel you really need a guide, this is a great way to save money and time – the cheaper tours will usually shuttle around a few hotels picking people up and dropping them off, which can be a pain. If you’re on your own, then one of the buses from the Calafate bus station to the glacier (there are 4 a day) will be the cheapest way to get there, also at US$30.

It’s also worth noting that the National Park entrance fee is per-day, so if you want to go and see some of the other huge glaciers in the park, you’ll need to arrange to do that on the same day as your Perito Moreno visit – this is possible, but it does risk making things a bit rushed. This is especially true if you want to take part in some of the popular activities at Perito Moreno, such as boat tours, or ice hikes across the glacier. The latter is great fun and you don’t need any experience at all to do it, with all the necessary equipment supplied. Group tours are arranged by hotels and tour operators in town for around US$200, including transport and the regular Perito Moreno tour.

Chilean Patagonia in a nutshell

Over in Chilean Patagonia, the high Andes come more or less right up to the Pacific coast, with just a thin strip of lowland between the mountains and the ocean.

Getting to Chilean Patagonia

In the very south of Chilean Patagonia, you’ll find the region’s main airport in the city of Punta Arenas, and further north, the small town of Puerto Natales, which is the main base for exploring the Torres del Paine National Park. Regular flights connect Punta Arenas with Puerto Montt in the Lake District and the capital Santiago – expect to pay between $100-300 for a one-way flight, depending on the season.

What to see and do in Chilean Patagonia 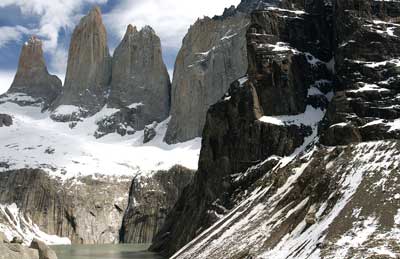 The undoubted jewel in the crown of Chilean Patagonia, and arguably the single main reason for visiting Patagonia on either side, Torres del Paine offers some of the best mountain scenery and trekking on the planet, culminating in the famous Torres themselves – an incredible series of snow-topped granite columns which rise up out of the park like gigantic needles.

The famous “W” trek, which usually takes 5 days, take you right through the park and to the base of the Torres. It stands up against the best high-altitude treks in Nepal and Peru, and is a must for any keen hikers but even if you think a 5-day trek may be beyond you, there are some excellent hotels in and around the National Park, which will allow you to do some great day walks and boat trips so you can still enjoy some of South America’s most spectacular scenery.

Where to stay in Torres del Paine

The snag with these hotels is the cost involved – many market themselves as high-end properties but if you’re expecting absolute luxury, you’re likely to be disappointed. Remember that you’re getting on for the ends of the earth here, and distance x isolation = cost. Hotels that are outside the National Park boundary tend to be a little cheaper, but you need to balance this against the cost of transport into the National Park (variable, but between US$5-10), and the daily park fee (US$30).

In practice these tend to make things equal out, so the cheaper hotels can actually be a false economy. The other thing to bear in mind about hotels is that prices jump massively during Torres del Paine’s peak season. So a room in a 3-star hotel within the Park boundary might be around $150-170 in September, but from October through to March, it will be around double that. There is a good reason for this, however, and that is that the climate during the short ‘shoulder’ season (roughly September at one end and April-May at the other) is highly variable. You may get lucky and avoid rain and snow, but if this is a once-in-a-lifetime trip then it could prove to be another false economy.

The cheapest hotels – and the one’s you’ll need to use if you’re doing a trek – are really very simple hostels, known as refugios. These are scattered around the trekking routes in the park, and provide simple meals and warm accommodation. Even so, they’re far from cheap and you can expect to pay up to US$200 per person in high season.

The other alternative is to camp: equipment is available for hire in Puerto Natales but be aware that you will need to carry it all yourself (although you can still pay for meals at the refugios if you wish) and so this should only really be considered by experienced hikers.

By far the cheapest way to get around in Chilean Patagonia is to use the regular shuttles which run between Punta Arenas and Puerto Natales (US$30) and Puerto Natales into Torres del Paine (US$15). Taxis and private transfers can be expensive in this part of the world, but the shuttle buses are frequent and affordable.

One good tip is that you can take a shuttle bus directly from the airport in Punta Arenas up to Puerto Natales, so you can get straight to where you need to be and avoid a night’s accommodation cost in Punta Arenas itself.

Getting between Chile and Argentina 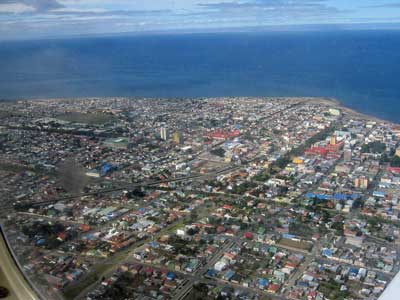 To get the most out of your trip you ideally want to combine both sides of Patagonia in a single trip, and luckily there are some cost-effective ways of doing this. Starting with the most expensive, a taxi from either Torres del Paine or Puerto Natales (the costs are broadly similar) across the Andes to El Calafate will be around US$250pp if there are two of you.

While this sounds extortionate, it’s worth remembering that it’s around a 6-hour drive each way. The much more reasonable alternative is to take one of the daily buses between Puerto Natales and El Calafate (US$60). These are slower – around 8 hours – and not quite up to the standard of coaches you’ll find elsewhere in Chile and Argentina, but they are comfortable enough and the roads are fine.

Puerto Natales is tiny and so you can walk from your hotel to the coach station; in El Calafate a taxi from any of the downtown hotels should be no more than a few dollars.

The other alternative to consider is self-drive. In most parts of South America, this isn’t always advisable for reasons from the condition of the roads to the state of the traffic, but in Patagonia both are good, and driving yourself can be a good option. A 4×4 isn’t usually necessary, and you can get a “soft-road” type 4×2 vehicle for around US$70/day from one of the many rental offices in Punta Arenas, Puerto Natales and El Calafate. The international permission to cross the border adds around US$20, and to avoid one-way charges you’ll need to circle back into whichever country you hired the vehicle in. It means it’s not always the cheapest way of travelling, but definitely the most convenient.

Sticking to your budget

Due to the distances and isolation involved, Patagonia is never going to be the cheapest destination in South America, but by sticking to cheaper transport options and making sure you shop around for hotels in places like El Calafate and Puerto Natales, you can do a huge amount to keep costs down.

In Torres del Paine you are much more restricted, but choosing a hotel inside the National Park so you can enjoy walking yourself on the well-marked trails rather than taking guided tours, you can make sure you enjoy everything Patagonia has to offer without breaking the bank…

The advice in this article was provided by Dan Clarke from South America experts RealWorld. After living and working in South America for years, he has learnt how to seek out all the available bargains and is constantly looking for ways to make holidays in South America more convenient and affordable.