Low-cost airlines: How to get the cheapest fare possible

The boom in low-cost airlines around the world continues, and now travelers have more options than ever when searching for flights. The in-flight service tends to be very similar once you are on board, especially now that traditional airlines have also started charging extra for almost everything. But the airfare strategies for low-cost airlines are quite different when trying to get the lowest fare possible.

You may be familiar with the recent research that states that the cheapest time to buy airline tickets is from 3 to 7 weeks out, but that actually doesn’t apply to low-cost carriers. Unlike their traditional counterparts, the low-cost airlines don’t start with high prices and then lower them a month or two out, only to raise them again as the flight draws near.

Which “low-cost airlines” are we talking about?

The trend that started with Southwest Airlines in the United States has now spread completely around the world. There are now close to 100 airlines (not counting the scores that have come and gone) that fit into this category, including:

And there are many more all over the world, each of them using the same fare strategy.

The short version: Buy as soon as possible because fares only go up

For the absolute cheapest airline tickets on a low-cost carrier, you’ll want to book as early as possible. Most of these airlines put tickets on sale anywhere from 6 to 11 months in advance, and if you are ready to purchase shortly after they are available, you’ll lock in the lowest fare.

In fact, many of these very-early fares can be ridiculously cheap, with fares in the past starting as low as €1 or £1 in Europe (plus taxes and fees). Those aren’t as common these days, but you can still get incredibly cheap flights if you are prepared to lock in and pay for a non-refundable ticket close to a year in advance. The problem for most of us, is that we are never sure enough about an exact flight that early.

Once you know how they set and move (raise) their prices, it’s easier to figure out the best strategies for getting the lowest possible fare without booking close to a year in advance. With few exceptions, this is how they work:

Imagine a flight with a total of 100 seats

Now, the number of seats in each tier, the number of tiers, and the amount the fare rises to in each next tier is different for each airline, based on an algorithm that is projected to yield the highest total income for the entire flight. But this general pattern is the same for virtually every low-cost airline, so you need to use a strategy based on this.

How to get the best fare without booking insanely early

Since very few of us are willing or able to buy an airline ticket 6 to 11 months in advance, we are usually stuck with a screen-full of options that are more expensive than we’d hoped. Still, as long as you know how it works, you can save money.

Once you know how the prices on the screen all relate to each other, it becomes quite easy to figure out when you should buy or if you can still wait and get the same fare. The patterns are very predictable so you can be confident that you are buying at just the right time.

Step 1: Determine how often the airline flies that route

It’s usually best to start on a meta-search site like kayak.com or momondo.com, although a few low-cost carriers don’t appear on those sites so you should also check whichbudget.com if you are not sure of the low-cost options for that route. Once you’ve determined which low-cost airline likely offers the cheapest tickets, it’s usually easiest to go directly to its own official website for the most flexibility.

Most low-cost airlines have several flights per day on each route that they cover, and the busiest routes might have as many as 12 flights per day. In these cases it’s easy to figure out how many tickets have been purchased for each one just by looking at the current price. But if a route only goes once per day, you’ll have to scan the current prices for the whole week to figure out how soon you should buy.

For popular routes with multiple flights per day 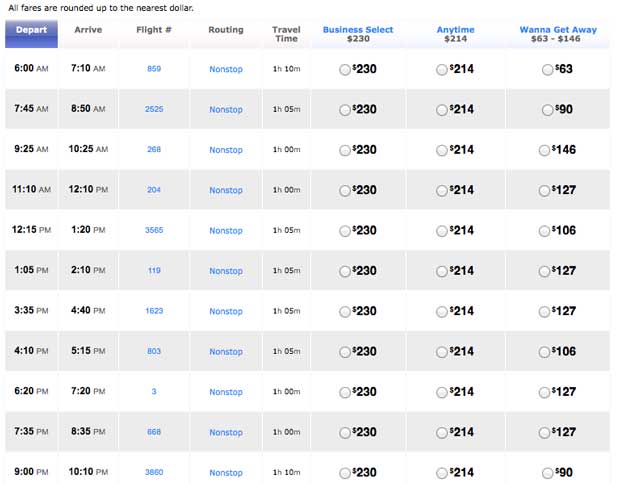 Just to show you, below is a shot of Southwest Airline’s flights on the same route if you are booking a few months out. They’ve evidently raised the base far from $63 to $66, but you can see that EVERY flight starts out at the same price. 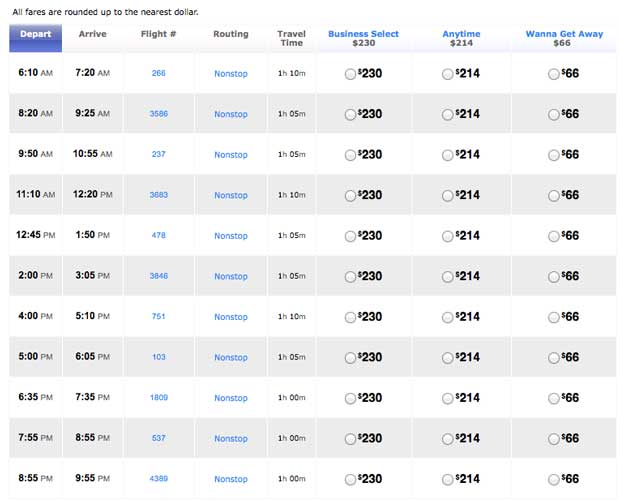 It’s easy to notice which flight times are more popular than others. The top chart is for Friday flights, when tens of thousands of Californians are planning on descending on Vegas for the weekend. The early-morning and late-evening flights are usually the last to fill up, and the flights with the most convenient daytime departure times go first.

Looking at the set of prices, we would expect both of those $106 flights to jump up to the $127 price level soon because the flights just before and just after are already at that level. The $127 flight at 11:10am is probably going to be the next one to jump to $146 when a few more seats are sold, so that’s another one to buy soon if you think it’s a fair price.

On the other hand, if you see 4 flights in a row at the same price, and any of them would work for you, then you can probably wait longer to book. None of them will go down in price, but they’ll probably jump up to the next price level one at a time, so you can see when the last one or two are still available at the lower fare.

For less popular routes with only one flight per day

Example: easyJet from London to Reykjavik

This is an example of a chart on a less popular route, which you can see goes once per day, six days per week. The cheapest fare on the page is for a Wednesday, while the most expensive fares are the ones on Fridays, Sundays, and Mondays. These prices aren’t just higher because they are around the weekend, it’s because they already have the most seats sold at lower prices. 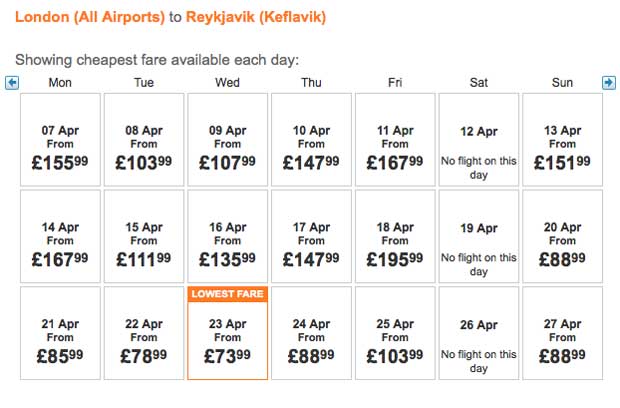 Easyjet uses many more pricing tiers on these flights, but they still jump up only when a certain number of seats have been sold at the lower price. The strategy here is to look at the fares for the days just before and after the one you are interested in. The greater the difference in fares, the better chance that the lower one is close to jumping up to the next price tier.

Looking at the 3rd week on the chart, you can see that all the flights are close to the same price. You can probably wait awhile longer before they’ll become as expensive as the week before (which also happens to be the week just before Easter this year). But you can see in the first week on the grid there is a difference of £52 between the Monday flight and the Tuesday flight. If I am able to go on Tuesday then I’d buy that ticket right away because the price could go up at any minute.

The bottom line on getting the lowest fare possible

Once you know how low-cost airlines set and raise their fares, it’s easier to determine when you should buy to lock in the lowest possible price.