We recently published our European Backpackers Index for 2017, and even we were surprised that London wasn’t at or near the bottom of the affordability list. In fact, using a strict set of typical expenses for each city, London was near the middle of the pack in Europe.

In our more recent European 3-star Traveler Index, London did come near the bottom, only cheaper than Zurich.

For nearly all of us, our first trip or two to London feels like we are getting beaten up by shockingly high expenses at every turn. I remember wanting to try fish & chips on an early visit in the 1990s, and nearly fainting when this simple (and cliché) meal in a neighborhood shop cost around US$14 back when five-dollar lunches were the norm in US restaurants.

However, once you learn the things to do and the things to avoid, you’ll discover that London doesn’t have to suck your bank account dry, and that it can offer excellent value compared to most major cities on the Continent.

1 – Stay in a hostel or university housing 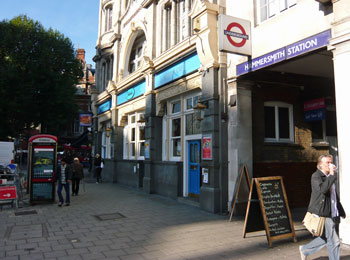 The primary reason why London came out relatively cheap on our Backpackers Index compared to our 3-star Index is that the city has an abundance of hostels, with dorm bed prices that are extremely competitive. During April we found dorm beds at several good and well located hostels for £10 per night including breakfast. Prices do climb during the peak summer months, which is another reason to consider coming outside that period.

The city also opens up dorm rooms at many of its centrally located universities during summer. While prices aren’t as low as at hostels, they do offer great value compared to nearby hotels, with rooms starting around £20 per night for a single, with some including breakfast. 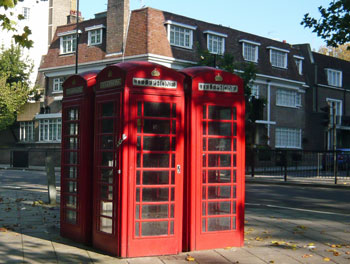 In most cities you’d be doing incredibly well to find a cheap hotel (or hostel) in the heart of the main tourist zone, but in London that can actually backfire in some ways. The problem is that real estate prices along the well-trafficked tourist pedestrian zones are so insanely high that common ‘neighborhood’ businesses can’t afford them. As a result, you can walk and walk and walk and you’ll only keep passing overpriced (and bland) pizza restaurants and very expensive Angus steak joints. Eventually, they’ll wear you down and in you’ll go.

So instead of staying near Oxford Street or Knightsbridge or Covent Garden you’ll actually be better off in Bayswater or Camden or Hammersmith. Not only are the rooms cheaper, but the neighborhoods are filled with local pubs, restaurants, and take-away shops that can cost half as much for food that locals themselves eat, and in many cases is better and more interesting. Cheap Indian restaurants are common in residential neighborhoods, and the food is usually quite good.

3 – Buy and use an Oyster Card for transportation 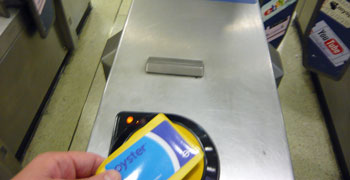 Until this computerized system came into place a tourist would pay £2 to £3 for each and every tube ride, so hopping around London could easily add up to £15 or more by the end of the day. Now, the pricing for individual rides has gotten a bit worse, but the introduction of the Oyster Card actually cuts prices way down and caps the daily total at a reasonable £6.60 if you start after 9:30am, or £8.00 if you want to get an earlier start, as long as you stay in the central part of London, which you likely will anyway.

Before your first ride, which might be on the Piccadilly Line at Heathrow Airport, you pay £3 (refundable) for the Oyster Card itself, and charge it at the same time with £10 (or whatever you estimate you’ll spend) in credit. Then, when you enter the Underground you swipe the card, and once again when you leave at your destination, and it deducts the cost of the ride. The best part is that it automatically caps itself at a price similar to the 24-hour Travelcard, so you get the benefits of a cheap, unlimited all-day pass (including on buses) without having to stand in line to buy one each day. If you only take one or two rides in a day, you’ve saved even more. 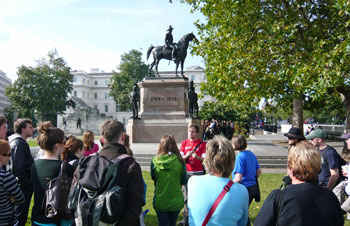 When you are drifting around London’s tourist areas you’ll notice a nearly endless stream of doubledecker tour buses passing you by. Unless you know the alternatives you’d assume that they are an efficient way of seeing the main sights, in spite of the shockingly high price. Not only are they poor value, but they are fairly boring as well. Most have recorded commentary, but even those with some live commentary all ply the same traffic-filled routes, so the views are mostly of the sea of cars and other buses surrounding you.

London has long been home to an abundance of excellent walking tours put on by knowledgeable and quirky locals, and while that continues to be the case, there’s a new company that has bulldozed its way into dominance of the market. Sandemans New London Free Walking Tours is part of a large and growing chain of similar tours throughout Europe and elsewhere. The 3-hour tour is filled with interesting and entertaining commentary from your enthusiastic guide, plus a nice stroll through the heart of London’s most historic neighborhoods. The guides work solely for tips, and as little as a pound or two is appreciated, but even most backpackers will feel that £5 feels very cheap and worthwhile at the end.

5 – Stick with the many free attractions 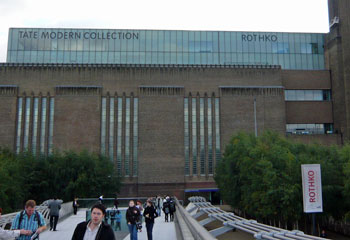 The single biggest reason that London came out as reasonably priced on our European indexes is that its main museums are famously free for all. In most European cities the important museums cost around US$15 each for an adult, but here there are dozens of choices that cost nothing.

So skip a turn on the London Eye and even a trip into the historic Tower of London in favor of the British Museum, the Victoria and Albert, and the Tate Modern. Except for the abundant free ones, London attraction prices tend to be extremely high compared to elsewhere. Our recent Madame Tussauds Index shows that the London location is by far the most expensive in the world, so concentrate on the world-class free museums instead. But if you ARE going to be visiting many of the top sights you might look at our review of the London Pass to see if it will save you time and money. 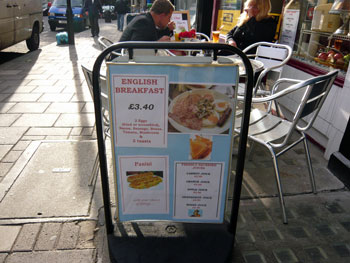 Just as with the above tip about finding a hotel or hostel in an area outside of the main tourist zones, your meal expenses will heavily depend on exactly where you choose to dine. If you decide you’ll have lunch near Harrods then you’ll be lucky to find something as cheap as a simple £10 meal in a touristy pub. Again, there are many zones in London that are just way too expensive to support a simple eatery, so the only options will be restaurants for business people and high-end tourists.

So the best strategy is to have as many meals as possible in the non-touristy areas to save money and possibly get better food as well. For example, in the aforementioned Bayswater neighborhood (just north of Hyde Park) you’ll find authentic pubs, small cafes, and even some fast-food places where the locals go. You’re also walking distance from the fascinating Edgware Road, which is home to the Middle Eastern community, with affordable restaurants open well into the wee hours. London residents do tend to make good salaries, but even they mostly can’t afford to eat in Leicester Square too often, so follow them part-way home for far better value. 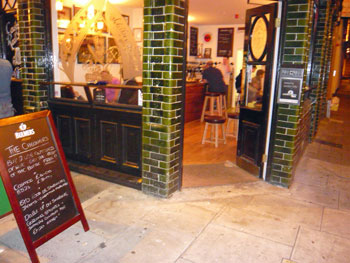 Once again, location is everything here, but in this case going outside the tourist zones will become a far more enjoyable experience while saving you money at the same time. A pint of beer will cost between £3 and £3.50 at almost every pub in London, except those in the tourist zones, where £4 to £5 is standard. So if you find a pub near a group of 4-star hotels, you’ll be paying a fortune to drink amongst other tourists plus a few local executive types. Walk at least a few blocks AWAY from the tourist attractions and you’ll likely find a place where neighborhood folks share pints and you’ll have the more authentic experience at the same time.

Those on even lower budgets will be happy to know that beer and wine prices in supermarkets can be shockingly low in London, so much so that officials are worried that they not only hurt pub attendance, but encourage binge drinking at home. Buy a few beers or a bottle of wine at a Tesco or Sainsbury’s near your hotel to get a cheap head start on a night out, and then join the crowds for the last couple of rounds before the traditional 11pm closing time.