Whether you are coming to Bangkok to teach English or coming to find a cheap and warm place to live to retire or start a business, finding a cheap serviced apartment in Bangkok can be a real challenge.

While doing research for this site I found myself in this situation, and parts of it turned out to be far more frustrating than I expected, so I thought I’d put together some tips here and share them. Unfortunately, simply Googling “Bangkok serviced apartment” will bring up endless listings for places that are way out of most of our price ranges, and way more than anyone needs to pay themselves.

Many people come here for the cheap cost of living. It’s true that Bangkok prices tend to be low for many things, but you’d never know it when searching online for an apartment or condo.

Three general kinds of apartments and condos in Bangkok

Let’s start by describing exactly what we are looking for here, as each type has a very different price range.

These are usually very expensive, and really only meant for those whose companies are paying for everything. With these you’ll get a full “American-style” kitchen complete with an oven and dishwasher and plenty of counter space.

Expect to pay at least US$1,000 per month for these, and most are much higher than that. 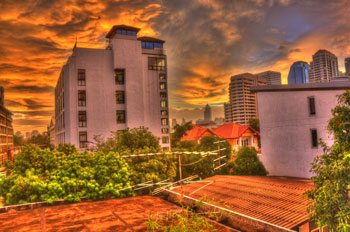 When you are moving here on your own it makes sense to save a lot of money by foregoing a few things you are used to. For example, instead of a hot-water heater you’ll have a small device in the shower that just heats a bit at a time. These are common in Europe and South America, but not in North America.

Instead of a full stove, you’ll have one or two large hotplates. There will be no hot water in the bathroom or kitchen sinks. Your kitchen will be small and in addition to the hotplate you’ll have a sink, a microwave, a refrigerator, and perhaps a hot-water thermos for making coffee or tea.

You’ll be surprised by how this is all you really need. It’s almost always too hot to want to cook complicated meals or use an oven, and you’ll always be close to street vendors, 24-hour 7-Elevens, and inexpensive restaurants.

Expect to pay between US$300 and US$800 for ones in this category. Finding these can be tough online, which we’ll discuss below.

(the photos on this page are sunset HDR shots I took from my apartment, mentioned below)

Most of the workers in Bangkok are lucky to make US$200 per month, so obviously they are living in a different style. I’ve heard these apartments tend to be very small, usually shared with a few people, and with even fewer of the Western conveniences than the expat-style places. If you come here and marry a Thai person you might be able to find a super-cheap place with them at some point, but until then you probably wouldn’t want to live in this style.

One big frustration I had was the expat-style places were buried online. In other words, there is so much profit for brokers and agencies in promoting the expensive places, that the cheap agencies are many pages down in Google searches.

You can always check Craigslist Thailand, but increasingly (according to long-time expats here) it’s being taken over by just a few agencies. I tried contacting them on a bunch of the listings (as many were affordable) and I never got any response because I was not looking for a 12-month lease.

If you are looking for a 12-month lease you might be in luck, but unless you are very familiar with Bangkok I’d highly recommend coming for at least a month or two in a serviced apartment on a short-term lease, and then slowly looking for a longer-term place.

This city is enormous, and reminds me a lot of Los Angeles, so if you lock in a long lease in an area that you don’t like, or if you lock in only to find you could have gotten the same thing for much less, you’ll regret it for a long time.

A serviced apartment is one that is fully furnished and ready to move into, with linens and dishes and pans and everything you need. There are plenty of these places in Bangkok, and daily or weekly cleaning service is normally included in the price.

Where to find serviced apartments in Bangkok

Once you arrive these places to get easy to find. If you want to do some online research first go to Thaivisa.com – this site is by far the busiest expat site in the country, and searching for things like “cheap serviced apartment” in their Bangkok forums will turn up some good suggestions that you won’t find easily on Google. It’s an ugly site that is cluttered with mismatched banner ads, and it’s also frequented by bitter and really negative expats who seem to be doing their best to discourage newcomers, but it’s the best resource anyway.

Here’s a good article on the subject from Transitions Abroad, but it’s mostly about the long-term rental market, though it does site good resources and lists places in the cheaper price ranges.

Where I found my serviced apartment

A friend, who was also looking for a place around the same time, sent me a link to a fancy real estate agency on Sukhumvit Road (the main business and expat area) that had a listing that seemed to be available for three months, which was what I wanted. A emailed them and a very helpful local girl named Anne told me she’d show me that listing, plus a serviced apartment that I might prefer.

Long story short, she showed me both, and the serviced apartment turned out to be bigger, nicer, and a far better deal for the same price. I moved in the following day. I also noticed that there are about 4 or 5 other similar serviced apartment buildings clustered in this same area, so since I moved in here I’ve been recommending that people come here and look at several different buildings before deciding. It seems that you can move in on the same day if you want to, as vacancies seem to be common right now.

Weirdly enough, going through this agency saved me some money. Anne was able to negotiate me a better deal than their website lists, and the apartment company paid her commission (I’m assuming).

Now, after two months here, I’ve very happy with the place, and if I didn’t only have a Tourist Visa I’d probably stay longer.

This post is meant to be general advice rather than an advertisement, but I will give the specifics below just to be complete.

Apartment complex: House by the Pond

Location: About 800 meters south of Sukhumvit just off Soi 22. It’s quiet, pleasant, clean, and it’s about 1km from 4 different supermarkets, the closest of which is Foodland (and also the cheapest). Two of those supermarkets are Carrefour and Tesco Lotus, which are the French and UK versions of Walmart, with loads of other restaurants and shops inside.

I’m paying 18,000 baht ($560) per month, not including water and electricity. I have one of the larger units in their older building, which is still very modern. Units in the newer building cost a bit more but are similar.

Finding these middle-range places online can be tough. Feel free to contact that real estate agency, but there are plenty of others doing this, I’m sure.

It’s a good idea to book a hotel in Bangkok for a couple days while you look. Honestly, the online ads are often very misleading, and you don’t want to commit to even a short-term serviced apartment until you’ve seen the place.

If you are looking for a long-term rental it’s still a good idea to get a short-term apartment first to get to know the place, and then you’ll be able to find a better deal on a long-term place when you are ready.

Craigslist might be helpful or a runaround. Thaivisa.com’s Bangkok forums are a great place to search where you can get prices and reviews from people living there.

A video tour of my place