Great Britain (England, Scotland, and Wales) has some of the best coverage and train service in the world, but it also has a pricing system that can be very confusing at first. If you just walk into stations to buy tickets as you might elsewhere in Europe, you’d be certain that Britain has the most overpriced train tickets in the world. But if you buy online very early in advance, you’ll find that the system is one of the world’s great travel bargains.

On continental Europe you can often save quite a bit of money by buying a Eurail Pass (as long as you aren’t a citizen of Europe), and Britain has its own BritRail Passes, which unfortunately aren’t at all cheap. For some travelers they might be the best option, but for most people there are better ways to go, and all of that is discussed below.

There are several meta-search sites that will show you the fares and then send you to the rail company’s site itself to make the purchase. The one I found that works the best and is easiest to use is National Rail. 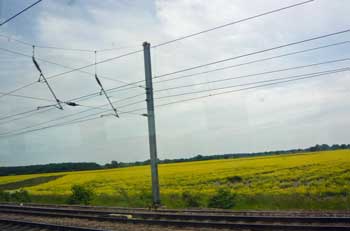 You can buy train tickets online and for a fee they can mail them to you, but for free you can pick up your tickets at the departure train station, or any other train station for that matter. Just find the self-service machines near the ticket counter in the station and press the “Collect pre-booked tickets” button. From there you’ll be asked to insert the credit card you used for the purchase, and then enter the 8-digit code from your confirmation e-mail.

It’s an easy system once you’ve done it once, and you don’t need a chip & pin credit card to retrieve the tickets. In most cases, the ticket agents can’t help you get your tickets since the online system is separate from their own systems.

When you finalize the online purchase you’ll be asked which station you want to pick up the tickets in. The default option is the outbound station for each journey, but if you’ve booked many tickets in advance you can pick them all up at the first station you visit if you’ve made that choice in advance. You have to do each transaction separately, so it takes 1 to 3 minutes for each one, but if you set aside a bit of time it can be a nice feeling to have all your tickets ahead of time so you can waltz into future stations just before the train leaves.

On many routes, and particularly the longer distance ones, you’ll get to choose a seat assignment when you buy online. On shorter routes and especially on commuter routes, there are no reserved seats so you can sit anywhere within the class you’ve purchased.

Train tickets way in advance are cheap, but very expensive on the travel day

While continental Europe is now following its lead, train tickets in Britain have worked more like airline tickets for many years. In other words, if you buy early you can get amazingly low fares, but if you buy just before a train leaves you might be paying a fortune. For example, the 90- to 120-minute ride between London and Birmingham can cost as little as £6 in advance or as much as £52 on the travel day for the exact same seat.

So the difference in fares can be dramatic, and there are many levels of “Advance fares” in between the highest and lowest. Fortunately, if you are flexible with your departure time you can often find discounted tickets even the day before you leave, but buying as early as possible is the way to save the most.

BritRail Passes are very flexible but not cheap 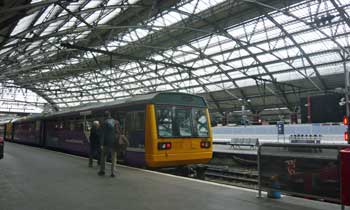 Simply put, BritRail Passes are overpriced for almost everyone. Even a longer pass with many travel days will price each journey at at least £30 or so, and there are few journeys where you can’t beat that price by booking in advance. Even London to Edinburgh, which is one of the longer journeys popular with tourist at 5 hours, can cost as little as £19 if bought online in advance. So strangely enough, unlike Eurail Passes, which can be bargains in many cases, a BritRail Pass is never the cheapest way to get around.

However, since walk-up tickets usually cost so much, a BritRail Pass can actually make sense for those who are covering a lot of the island but don’t want to plan in advance. For example, if you just walk into the station in London and ask for a ticket on the next train to Edinburgh, they might ask for £120 or even more. With a BritRail Pass you can literally go anywhere on the island for between £30 and £50 per journey, depending on the type of pass you buy.

For the cheapest possible trip, book way in advance

So with the above points in mind, by far the cheapest way to travel around Britain by train is to book well in advance, hopefully 2 months or so for the lowest fares. In fact, it can be laughably cheap to travel up and down the country if you book early, or insanely expensive if you wait until the day you want to go.

It’s hard to match the freedom of having a rail pass that allows you to go anywhere on a whim, but in the case of Britain, you are far better off planning your stops way ahead of time and locking them in. For example, going from London to York to Edinburgh to Inverness to Glasgow to Liverpool to Bath and back to London might cost as little as £100 total if you buy early, or it could cost you £500 total if you buy as you go. It’s such a dramatic difference that it’s worth pre-planning so you can spend the extra money on other things.

Roundtrips are much cheaper than two one-ways in some cases

Even within Britain, most train journeys are priced by leg, so two one-way tickets will cost the same as a round-trip (return) ticket. But on some routes there can be a significant savings when booking a round-trip. I’ve discovered that same-day return tickets are often only a little more than a one-way, so doing day-trips by rail can be more affordable than you might think.

It’s difficult to figure out when round-trips are cheaper compared to the normal situation of them just being two one-way tickets, so it’s just something to try when you are shopping for the best fares.

If an online fare seems too high, check fares for different parts of it alone 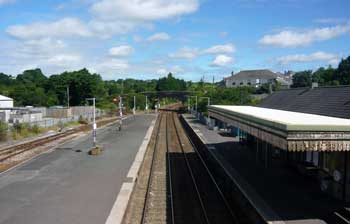 There are 28 different rail companies operating in Great Britain, and most of them operate only within a relatively small region. In other words, if you are going from one part of the island to another, there’s a very good chance that you’ll take one rail company to a hub city and then another company to your final destination.

In some cases those companies can work well enough together to offer discounted tickets on both legs for those who book early, but not always. If you find that a particular journey seems to be priced weirdly high, it’s worth checking prices for the parts of it on your own. As an example, I was going from Blackpool to LLandudno in Wales, and the total price started at around £38 including a change in Manchester. Yet when I checked fares from Blackpool to Manchester and then Manchester to LLandudno, it was £27 total because each rail company had specials to and from that hub.

For long trips, consider a stopover night on the way for a cheaper overall fare

Similar to the situation above, a few times I found that fares for longer journeys (4 hours or more) were often unusually high, but when I checked prices for the first half and then the second half, they were cheaper. In more than one of these cases I decided to stop for at least a night in an interesting city in between, and carry on the following day or even later.

With a flexible schedule or if you plan well in advance, you can build in either a day trip or an overnight stop to a longer trip and save money in the process. Fortunately, Britain is so densely packed that no matter where you are, you are within an hour or so of something worth checking out.

Building on the two tips just above, it’s worth trying some creative routes if you want to get the best fares. At the moment, the booking system shows fares for only the most obvious routes between two cities, but sometimes you can go slightly out of your way and cut the fare in half or even more. When a £10 fare sells out sometimes the only option is £30 on the same train, though you might be able to get there for £15 if you try changing in a different city along the way.

If you are booking well in advance then most likely you’ll be getting the very best fares or something close to them for each leg. However, if you are booking only a few days out and all the Advance tickets are gone, it can pay off to look at a map and consider checking fares to a different city along the way and then to your final destination from there.

If the trains look too expensive, there are cheaper buses

Just like the British trains start with low prices that go up as the journey nears, there are several large bus companies serving the island that do the same. If you search for a train journey and there are no Advance fares left so the only available fares look too high, just google the same pair of cities for buses.

You can also buy bus tickets online, and if you buy way in advance you can get amazing deals. For the buses you don’t get tickets so if you buy online it’s just a matter of having your confirmation number from the receipt email so they can check your name off as you board.

The Facebook Resort on Boracay Island, Philippines: An unexpected move by the social media giant? Is the Paris Pass 2022 worth it? We review prices and value here List of free walking tours around the world Paris attraction, museum, and city-tour prices for 2022