New York budget travel: 7 tips from a local to keep it cheap

Without a doubt, New York City can feel extremely expensive, at least compared to anywhere else in the United States. If you don’t strategize smartly you’ll end up spending your entire budget with half your stay remaining. We recently discussed London budget travel tips, and some of these are similar, but there are a few key differences.

I lived in New York City for over 5 years off and on since the early 1990s, and as a perennial cheapskate I learned all the tricks for how to maximize enjoyment and minimize expenses. Since I’ve also visited NYC as a tourist many times before and after, I’m happy to share my best tips here, especially aimed at first or second-time visitors.

If you pick where you stay carefully you can save a lot of time and money each day, and see a cooler and more authentic city at the same time.

7 tips for a better and cheaper New York City visit 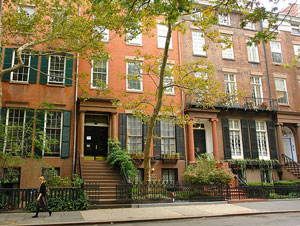 Unfortunately, hotels in New York City are more expensive than anywhere else in the United States, and worse still, most of the cheapest ones are lousy. The rooms are tiny (by US standards), there’s a good chance that it’ll be noisy, and service at the more affordable places tends to live up to the cliché about New Yorkers being rude.

If you choose to stay in an actual hotel, and if that hotel goes for under $200 per night during the high season then you can expect the TripAdvisor reviews to be dreadful. They are all that way, and if they weren’t the place would raise its prices. Just prepare yourself for this reality and deal with it by bringing earplugs and keeping your expectations low.

Or, you can stay in a hostel, many of which have private rooms. Even the hostels in NYC tend to get bad reviews and charge a lot, so again, prepare yourself for that. You could also do well by trying AirBnB.com, which allows residents to rent out anything from a sleeping bag in a corner to a fully furnished apartment, at prices that are usually competitive. In some other cities it might not be worth the hassle, but New York isn’t one of those cities.

Assuming this is your first visit to NYC, or maybe your second, where you stay can honestly make or break your trip. If you just search for “New York City” hotels at a travel-booking site you’ll find that all the cheapest ones are either near one of the airports, or in some other random part of Brooklyn or Queens, or perhaps just across the Hudson River in New Jersey. Resist the temptation to book at one of these places.

Here’s the thing: About 99% of the things you’ve heard of or care about in New York City are in Manhattan, and almost all of these are in the lower two-thirds of Manhattan. If you are staying in this zone you’ll be walking distance to plenty of cool things and a fast subway ride away from all the rest. Unfortunately, there are almost no other hotels that are actually convenient to reach Manhattan quickly, so you are looking at a minimum of 30 minutes each way, and probably more. Visiting New York City is exhausting and you are going to want to come back to your room at least once during the day to rest up a bit. If you don’t do this you’ll likely opt for an early night instead, since going back and forth well into the evening is a pain in the ass and can feel dangerous.

So find a hotel in Manhattan, south of 90th Street, and just deal with the tiny room and noisy surroundings. However, unless you happen to be a Broadway Show buff, you are also better off staying outside of the general Times Square area. That zone has about two-thirds of Manhattan’s hotels, and almost no decent budget restaurants or useful shops. It almost feels as if it’s designed as a deliberate trap to take advantage of tourists who want a “central” location, by luring them in and then taking all the best things about New York out, so they’ll have no choice but to pay double for mediocre food or ridiculous souvenirs.

Here’s a quick guide: If you consider yourself a creative person then stay “Downtown,” which means below 25th Street or so, and includes Chelsea, Greenwich Village (including the West Village and East Village), the Lower East Side, SoHo, Chinatown, and TriBeCa. If you’d rather not hang out with would-be poets, musicians, and graphic designers, then stay north of 50th Street. The Upper East Side is the old money area and the Upper West Side is the new money area.

To make things easier we’ve created our editors’ choice New York hotels and hostels list. Each of the 7 recommendations is a great place with top reviews and a very good location. 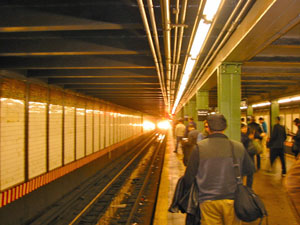 Some people will tell you that riding the New York City Subway is dangerous. It’s not, at least not for those who are used to urban environments. Others will tell you that it’s fine during the day, but it’s too dangerous late at night. This is also not true and hasn’t been in a long time, as long as you are anywhere near the nightlife zones, including virtually all of Manhattan. Descend into a subway station at 3am and you’ll discover that it’s totally packed, or a train just left and it’s going to fill up again right away. Service is only about every 20 minutes on most lines late at night, so you might have to wait a bit, but you’ll honestly have plenty of normal folks as company.

You can actually walk to plenty of things if you follow the accommodation advice above, but the interesting part of Manhattan is about 8 miles tall, and taxis are expensive (unless you are in a group of 4 or 5) so the subway is the best way. Even if you are only in NYC for 3 or 4 days it could be worth getting the 7-day unlimited ride MetroCard for $29. Single rides (with unlimited transfers) cost $2.50, so if you are only in town for a couple days then you might save by buying individual rides, or you can buy a pre-paid $20 MetroCard and you’ll get 9 rides plus a bit of change left on the thing.

4 – Buy Time Out New York and read it

The London-based Time Out Magazine chain brought its weekly listings magazine to New York over a decade ago, and the local edition is still by far the best place to find out everything from movie times to museum exhibitions to concert listings to sample sales at fashion houses. But it’s also invaluable for its listings of over 100 free things in each edition.

New York City being what it is, there are weird and wonderful things happening every day of the year, and they are often totally free. Sometimes they’ll even include free drinks or other extras that you’d never expect, and loads of them are listed in TONY (as it’s called). The Time Out New York website also has much of the same information, so it’s a good source of pre-trip planning info. 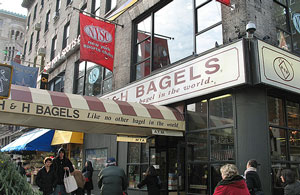 Sitting down at a proper restaurant in New York City tends to cost a minimum of $10 for a main course, and things can get far crazier from there. Fortunately, budget travelers have plenty of great options for dining on your feet for a fraction of this price, and you’ll be in good company with all the locals as well. In the mornings you can get a huge bagel stuffed with cream cheese (or other fillings) for well under $3, as long as you are staying in a residential area instead of Times Square. Most small markets (known as bodegas in many neighborhoods) or delis sell fried-egg sandwiches or even full eggs & bacon breakfasts for well under $5 as well.

For lunch or dinner you’ll have choices of nearly-identical pizza-by-the-slice places on every other block. A large slice of cheese pizza will be around $2.50, and two of them will make a meal for all but the biggest appetites. There are plenty of delis making good and filling sandwiches for around $5 to $7 each, or you could go to MacDougal Street in the heart of the Village and choose from the many falafel or shwarma shops for an on-the-go meal in the $5 range as well.

6 – Pay what you can afford at the Met Museum

The Metropolitan Museum of Art is arguably the finest museum in the Americas and even the facility itself is worth experiencing even if you’re not a big art person. It also has a “suggested” admission price of $25 for adults, $17 for seniors, and $12 for students. In reality you can pay $1 or even nothing and march right in (if you can ignore a quick bit of scorn from the ticket people).

Here’s the thing: The admission price isn’t meant to bankrupt visitors or even keep them out. If you are a real art aficionado and you plan on spending half a day or more in the Met, then pay the suggested price, even if it means skipping some of the other insanely expensive New York City attraction prices. But if you only want to look around for an hour or two then be bold and pay what’s in your budget. Plenty of locals do this every day, and some of them even brag to their friends about it, figuring that enough tourists (suckers) subsize it for them. I’ve done it twice ($5 each time) for shorter visits and they are very used to it so don’t worry.

7 – Start the party before you go out for the night 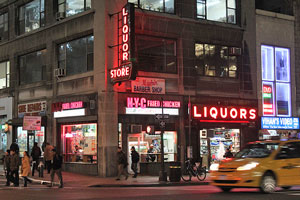 One of the wonderful things about nightlife in New York City is that there are literally many hundreds of bars and pubs throughout Manhattan, and the majority of them don’t have any cover charge. They tend to be quite small and the old-fashioned pub-crawl is a great way of testing at least a few places before you lock into one that you like. The problem is that a pint or bottle of beer will cost $5 or more at virtually all of them, and wine or mixed drinks will be at least a couple dollars more, so things add up quickly.

The best strategy, as it is in so many other big Western cities, is to have at least a drink or three in your room before you go out. Again, as long as you aren’t staying near Times Square, you’ll find a local market or deli that will sell you a can of bottle beer for $1.50 or less. Weirdly, there are no volume discounts at these places, unless you find a supermarket and can deal with warm beer, but still you can save a lot this way.

If you like wine instead you can buy a bottle for around $8 at state-licensed liquor stores (often hard to find and they close early) or go to Trader Joe’s Wine Shop on 14th Street and get the excellent Charles Shaw wine for $2.99 a bottle.

23 Best Europe destinations in September of 2022 Countries where the US dollar is strong: Cheap destinations around the world Finding cheap hotels in Asia requires different strategies Routehappy is new and instantly my favorite flight-search tool