Where to go in Norway in 3 days to 2 weeks: Fjords, cities, tours

With its remote northerly location, Norway is not the kind of country that people find themselves in accidentally. The only country that it sometimes gets combined with on European itineraries is Sweden, which is otherwise just as remote. But Norway has some of the best and most abundant natural beauty in all of Europe, so it’s worth going out of your way to get there.

The other famous issue that many potential visitors have is the cost. Ever since the beginning of its oil boom in the early 1970s, Norway has become one of the world’s most expensive countries for foreign travelers. The good news is that due to a weakening of its currency in late 2014, Norway isn’t nearly as expensive as it once was, and most things are actually good value for visitors.

Planning an itinerary for Norway 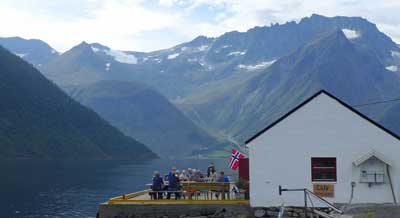 Even though Norway is a large country by landmass, it only has about 5 million residents and only a few major destinations worth considering. If you only have 3 or so days to spend in Norway there are a few great choices, and you can see pretty much all of the highlights in two weeks.

Below we’ll discuss the most popular options and why you might want to choose them for your own trip. Even if you only have 1 or 2 days on a layover, there are some great choices.

A note on travel costs in Norway

I discuss all of the specifics on how much things cost in Norway for visitors in another article, but I’ll also provide a very short version of it here that should help some people plan. Although you may have heard that many things are insanely expensive in Norway, it’s not true for most things.

Food and drink costs in Norway:

Restaurant meals in Norway are generally twice as expensive as in most other richer European countries. The same is true for alcohol and even soft drinks, with prices often shockingly high. 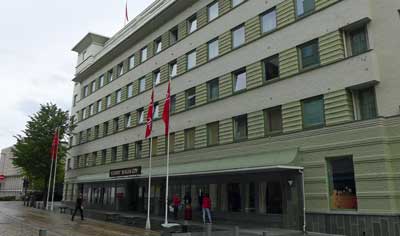 Interestingly, hotel prices in Oslo, Bergen, and other Norwegian cities are surprisingly reasonable for the quality and locations. Nearly all hotels are built for business travelers so quality is high, with large and comfortable rooms (by European standards). Hotels aren’t cheap in Norway, but you’d pay twice as much for a similar central room in Rome, Paris, or London.

Museums and most other cultural attractions are mostly free or have very reasonable prices. And of course, the gorgeous scenery that the country is known for is free once you are in position to see it.

Norway has some of the most modern and efficient trains in the world, and if you book in advance on the “minipris” fares, they are very cheap as well. Rental cars can be expensive, as can the fuel, but still good value for a group. The Hurtigruten ships that offer the best fjord views are expensive by cruise standards, but most find that they are well worth it. 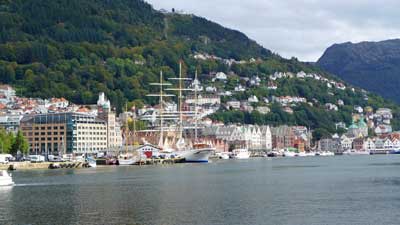 While Oslo is the capital and largest city, Bergen is actually the best choice of destinations if you are only going to make one stop. Bergen is known as the ‘gateway to the fjords,’ which cover the entire west coast of Norway. The old harbor has a storybook look to it and there are many historic sights clustered within a short walk of most tourist hotels, along with an abundance of restaurant and drinking options with excellent views. 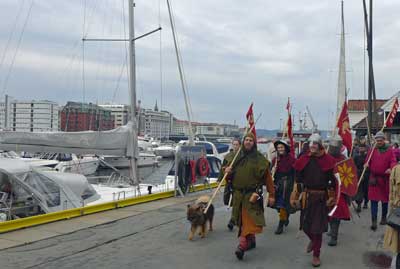 Even the quickest visit will want to allow a full day to explore the heart of Bergen itself, and two days would be even better. After that you can take one or more of the many fjord tours by boat and train. Norway’s cities are worth a look, but really the main reason for going so far out of your way is to see the stunning scenery that is unique to this part of the world. 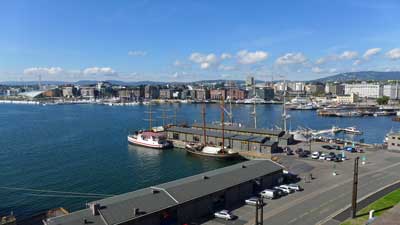 The Oslo airport is much larger and busier, and if you are taking one of the many cheap flights on Norwegian Airlines, you are almost certain to first touch down in Oslo. While it’s not as charming as Bergen, the capital also has a lot going for it so it’s worth at least a couple days, especially if you really want to feel like you’ve ‘visited Norway.’ 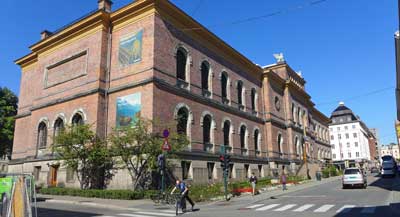 Its setting surrounding an attractive harbor is lovely, and there are at least a few key attractions that should be of interest. Oslo was the home to Edvard Munch, whose (4 versions of) The Scream are among the most famous paintings on the planet. One version is within the special Edvard Munch room in Oslo’s National Gallery, which is otherwise filled with much of the finest artwork ever produced in the country. Another version is in the stand-alone Munch Museum, which obviously focuses on Norway’s most famous artist. There are many other museums and galleries of note in Oslo, all of which are affordable or free to visit.

Another major attraction is the Oslo City Hall, which is where the Nobel Peace Prize is famously awarded each December by the King of Norway. There is also a free and permanent exhibition showing all of the past winners. 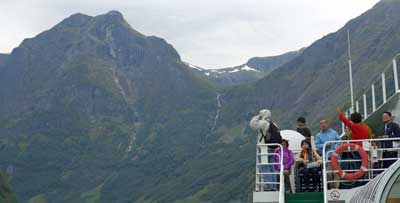 As we’ve discussed, the main draw to Norway is its scenery rather than its cities. “Norway in a Nutshell” is a group of routes and tours that show off the best and most accessible parts of the fjord scenery in a well organized way. The most popular routes are those that connect Oslo and Bergen, which makes them an ideal way to get between the two main cities with the best sightseeing possible.

While they are “packages,” they aren’t really guided tours. The Norway in a Nutshell that goes from Oslo to Bergen, for example, starts with a scenic train ride that takes you to the breathtaking Flåm Railway, which takes you to a fjord cruise and then to a gorgeous bus ride that leaves you off at a train station for the short and final leg to Bergen. The shortest package is done as a day trip between Oslo or Bergen or just a day trip starting and ending in Bergen. 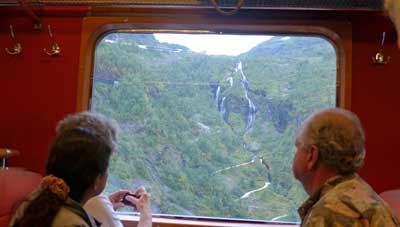 There are guides who point out the best sights on the fjord cruise and the bus journey, but otherwise guests just get vouchers for all of the segments and you go on your own. There are also many other tours to choose from that visit other parts of Norway, but the one between Oslo and Bergen is certainly the best introduction to the country, and it can be stretched out to 3 or more days for those with plenty of time on their hands. 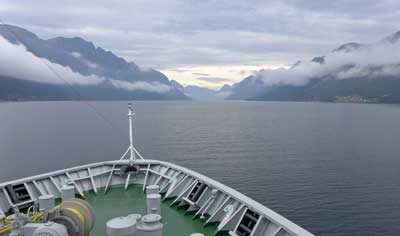 If you want to witness the unique beauty of Norway’s fjords, you can’t do better than on the famous Hurtigruten ships that have daily departures starting from Bergen and going north. You can get from Bergen to Trondheim (see below) in 2 nights and 1 day, or you can stay on board all the way to Kirkenes (near the Russian border) and all the way back to Bergen over 12 mellow days.

Each Hurtigruten ship holds between 500 and 1,000 passengers in cruise-ship-style cabins, but they insist that the Hurtigruten is neither a “cruise” nor is it a ferry service. It’s something in between, and quite a bit different from either. The ships are fairly luxurious, but there are few activities available, which keeps the focus on the scenery as well as the social aspect of boat travel in a group. 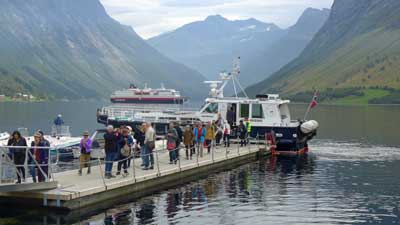 Between Bergen and Kirkenes there are 33 stops in little towns and villages along the way, many of which are deep into the fjords so the views are spectacular. The ships also deliver cargo and mail, so they are a big part of Norway’s rural economy. On the way north many of the stops take place at night and are short, and all of those short stops are longer daytime stops on the way back south. In other words, you’d need to take the entire 12-day journey to see everything, although many people do shorter trips which disembark part of the way up, followed by a flight back to Bergen or Oslo.

My own experience on the Hurtigruten was just the 36-hour section from Bergen to Trondheim, and after I realized what the true focus of the voyage was, I loved it. Again, it’s not a cruise and there are no karaoke contests or water slides, but there is some evening entertainment as well as a mix of fine dining and bountiful buffet meals. 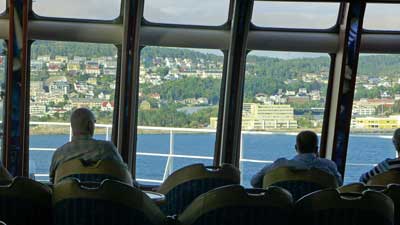 The main draw of the trip is having a chance to disembark in these tiny photogenic villages for a nature hike or maybe a lunch. Each stop looks different from the others and the scenery between each stop can practically bring you to tears if the lighting is right.

The Hurtigruten compares to a high-end cruise line in price and the service is excellent. You’ll spend much of your time in one of the lounges just staring out at the fjord scenery and chatting with friends. It’s not for everyone, but it’s an excellent choice for some people. 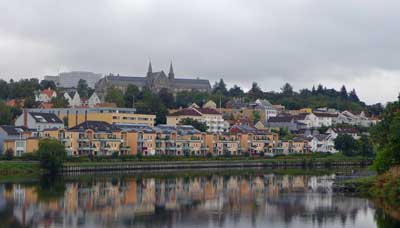 Norway’s third largest city is also the top end of a triangle that you can connect with Oslo and Bergen. Trondheim is a university town that probably wouldn’t be worth visiting on its own, but it’s a lovely stop for anyone trying to see something a bit outside of the tourist centers. Trondheim is also the first major stop north of Bergen on the Hurtigruten (mentioned above) so it’s a popular addition to any longer Norway itinerary. 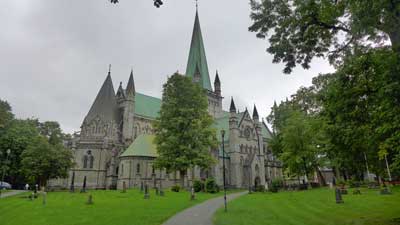 This is a thousand-year-old city with a gorgeous historic district along its main river. The major sight here is the gothic cathedral called the Nidarosdomen, which is the largest cathedral in northern Europe.

I’ve probably toured at least 50 different cathedrals in Europe and this one stands out as one of the few that you’ll never forget. Even if you feel like you’ve seen all the cathedrals you need to see in your life, this is one you should not skip.

Trondheim also has some lovely fjord views on its own, as well as a friendly entertainment and nightlife district at its heart. It feels much smaller than Oslo and Bergen so it gives you another perspective of this culture that doesn’t seem to try too hard to impress outsiders. 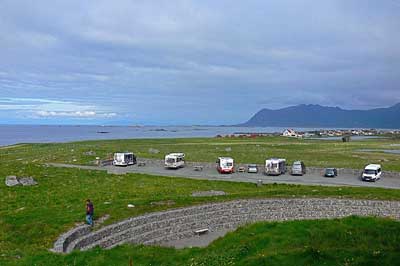 If you thought Norway in general was remote, the Lofoten Islands take it to a new level. Well off Norway’s north western coast, many describe the Lofoten Islands as the most scenic part of Norway, which is really saying something. This is also the only one on this list that I haven’t yet visited myself, so I’m going party on the information from a friend who was visiting there while I was doing the rest.

In addition to the dramatic fjord scenery, Lofoten is within the Arctic Circle so it’s an ideal place to experience the midnight sun during the summer time, and a good place to witness the Northern Lights in general. The area is unsurprisingly dotted with fishing villages but there are also campgrounds and plenty of nature to soak in.

The challenge in visiting Lofoten is that you either have to fly in to one of the small airports on the island chain, or take a very long drive or bus ride if you are starting in the south. A bridge was completed in late 2007 that connects Lofoten to the mainland, but it’s a 20-hour drive from Oslo or a series of bus rides that will take at least two days.