8 Types of TripAdvisor reviews you should completely ignore

Even though it’s incredibly popular, most travel writers seem to put almost no trust in TripAdvisor hotel reviews. Some people assume that an amateur reviewer’s thoughts are worthless, while others assume that a huge portion of the reviews are faked by the hotels or their competitors. Personally, I find TripAdvisor hotel reviews to be invaluable because once you know what to look for it’s the best way to quickly know what to expect at each property.

On the other hand, after traveling around the world a couple times as well as doing many hours of hotel research each week for this site and others, I’ve come up with at least 8 types of reviews that should be completely ignored. Some are by trolls while others are by idiots, but in either case I know I can safely skip right over them if not actually add or subtract points in the opposite direction.

The thing that almost all of these have in common is that they violently disagree with the opinions of most previous reviews so they use various tactics to try to do more damage or give more praise than a normal review should. If a hotel averages 3.5 stars by dozens if not hundreds of reviewers, chances are the 1-star reviewers have a personal ax to grind.

8 Types of hotel reviews you can completely ignore 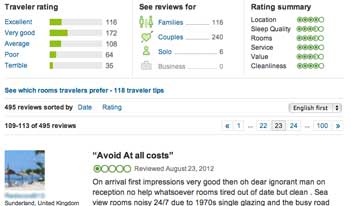 In pretty much any city, it won’t take long to find hotels with reviews titled “Avoid at all costs!” or “Stay away!” accompanied by a single-star rating. The funny thing is, these are very common even at hotels with dozens of reviews and a respectable average of at least 3.0. Reviews like this are classic trolling where the writer is single-handedly attempting to destroy the hotel.

Considering that the vast majority of guests don’t leave reviews, and most people who do leave reviews leave positive ones for these hotels, a trolling review like this almost certainly results from a single incident where the guest didn’t get his or her way. Perhaps there was a genuine problem, but with a person like this it’s even more likely that they were to blame anyway. 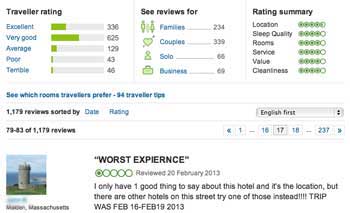 It should be pretty obvious by now that anyone who types on the internet in ALL CAPS IS SOME KIND OF PSYCHO THAT SHOULD BE IGNORED. This isn’t a problem that people are willing to let slip, like overusing exclamation marks or typing “LOL” at the end of a sentence as if they are already cracking themselves up and need to share that with you as well.

Nope, people who type in all caps are like the internet version of autistic except they don’t deserve any sympathy. These are people who not only don’t mind SHOUTING AT YOU ON THE PAGE, but they also seem to think their hotel review will look more important than the others that weren’t clever enough to glue the CAPS LOCK button down on their keyboard. If anything, I’d do the opposite of what they recommended to me. 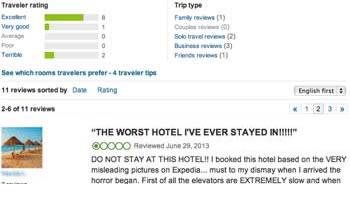 This is another common trolling technique where the reviewer is filled with rage and trying to put the hotel out of business with a few hyperbolic paragraphs. For one thing, how do I know the types of hotels you have stayed in before? If you are a Saudi prince you might say that the Abu Dhabi Four Seasons is the worst hotel you’ve stayed in, even though I’d love it.

But again, as long as this one-star review is nearly alone among a sea of 3-, 4-, and 5-star reviews, a review like this might actually say more about the poor hotel-choosing skills of its writer than about the hotel itself. Or more likely, this person is just a jerk who loves to complain and wants to be heard by anyone who will listen. 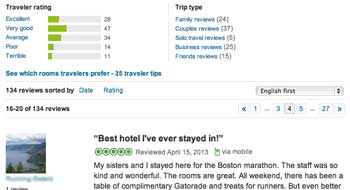 Even the least talented fake reviewer would know to avoid using “best hotel ever” as their review title, so you mainly have to chalk these up to overly enthusiastic and easily impressed real reviewers. But again, how do I know the sorts of hotels you’ve stayed in?

For all we know this might be the 3rd or 4th hotel you’ve ever slept in, and this is the first one that came with exterior windows so you were blown away. Overall this is a lazy and unhelpful way to rate a hotel so these are yet another type to just skip over immediately.

5 – “Everything was filthy!” (when no one else mentions it) 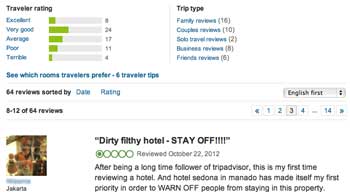 Granted, there are thousands of hotels in the world that don’t scrub things properly between guests, but for some reason you’ll still see plenty or reviews like this where no one else seems to notice the filth problem. If you see dozens of reviews that are mostly positive and only one rage-filled review that portrays the place as a pig stye, it’s probably safe to ignore it.

More than likely, these reviews are left by someone who was displeased by something else entirely, but explaining that would make them sound too selfish or unreasonable so they decided instead to vent by calling the place “filthy.” Either that, or these reviewers are suffering from some disorder and probably should never leave the house. 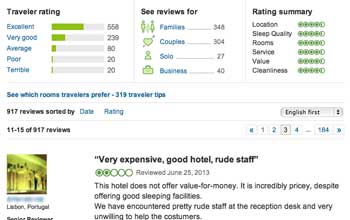 I’ve stayed in many hundreds of hotels in my life and I don’t remember encountering a staff member that I’d describe as “rude,” yet that seems to be a very popular buzzword for some reviewers. Sure, sometimes the clerks are busy or not paying close attention, but painting an entire hotel staff as being rude probably says a lot more about the guest than the employees.

My theory on this is that people who use the word “rude” a lot are people who try to get more than they paid for, like a room upgrade or a free breakfast. And when they are rightfully turned down they chalk it up to hostile staff. I’ve seen guests try to blackmail hotels by threatening bad reviews unless they got something free, and calling them all rude is likely part of this tactic when they are turned away. 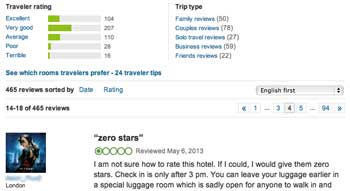 While TripAdvisor’s scale of 1 to 5 might feel a bit constricting, it’s hardly their own invention. It doesn’t take a scholar to realize that 1 means the worst and 5 means the best, so obviously someone trying to sneak a zero star review in is just doing it out of spite. “The worst” doesn’t describe the horror of the place well enough so they want a scale of their own.

It’s pretty clear that people who would prefer to give zero stars are doing it only because the place generally gets good reviews and their 1-star wouldn’t weigh the score down enough. When they log in to rip the place a new one, they can’t believe the high average from everyone else, so the zero-star threat is their lonely cry in the dark.

People who book themselves into the lowest rated hotels only have themselves to blame. One of the things that makes TripAdvisor so valuable in spite of its many critics is that you can see at a glance what the consensus is among previous guests. If a hotel has more than a few reviews and the average is 2 stars or even lower, your expectations should be on the ground if you dare book.

But to me the weirdest part of this situation is that these people are obviously aware of TripAdvisor, but they booked anyway and then were so filled with rage that they piled on their own horrible review. If you book at a place like this it means that you are terrible at choosing hotels and probably don’t deserve the right to influence others with your idiocy.

22 Best May destinations in Europe for 2023 San Francisco CityPass 2020 review: Is the pass worth it for you? Recommended Venice hotels that offer good value Cheapest cities for 5-star hotels: 102 Global destinations by price in 2022