As someone always on the lookout for travel bargains, I was instantly intrigued when I first heard about the Malaysia-based Tune Hotels concept a couple years ago, and now that I’ve stayed in two of them I’m even more impressed. They claim to offer “5-star luxury at a 1-star price” and in at least a few key ways I think they deliver brilliantly.

The Tune Hotels chain currently operates 27 locations in Malaysia, Thailand, Indonesia, Philippines, and the UK (including 4 in London), with plans to reach 100 locations by 2015. The founder is the same 48-year-old Malaysian-Indian man who started AirAsia, which is a popular low cost carrier based in Southeast Asia that I’m very fond of, and so far the hotel concept seems to be going well. If they continue to be successful we’ll no doubt see some similar chains opening up, so this new style of hotel might soon be found in large cities everywhere.

The rooms seem to range from around US$30 to US$50 in Asia, up to just over US$100 per night in London. With certain promotions you can book them for even less, though if they are almost full the rates are likely to be even higher.

The basic concept of Tune Hotels

In a Tune Hotel you can expect a very comfortable bed and a hot/cold ‘power shower’ in its stylish ensuite bathroom, and everything else comes at an optional extra cost. Even the use of a towel is an option, which could sound horrifying if not for the high quality and low cost of what they do provide. A popular package includes the use of a towel, soap, air-conditioning, with 12 or 24 hours of TV and Wi-Fi.

The idea is not only to offer a great product at a great price, but also to discourage waste of any kind, so it’s very environmentally friendly as well. I value TV and Wi-Fi so I’m happy to pay for them, but people who don’t should be happy to save the money.

The hotels have no restaurants or food service, but they do sell drinks and snacks in the lobby, along with toiletry items and other things hotels guests might need on short notice.

Some key things to know about Tune Hotels

The bed is VERY comfortable 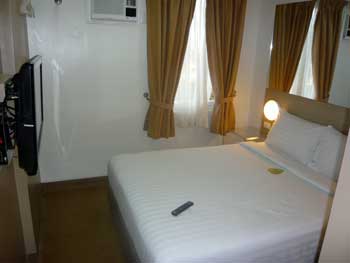 As someone who has spent literally hundreds of nights in cheap hotels all over the world, I’m sort of used to the cheap beds they all have. I’ve also been fortunate enough to stay in some 4- and 5-star hotels, and the Tune Hotels bed is honestly in the latter category of comfort. If your primary objective is a good night’s sleep, a bed like this is amazing in this price range.

The bathroom is also rather luxurious

So far the Tune Hotels are all in Southeast Asia and the UK, and cheap hotels in both areas are known for bathrooms that are a step or two worse than you find in most of the world. So having a spotless (if small) bathroom with a designer sink and a powerful rainshower-head and good water pressure is another fantastic bonus.

But the rooms are quite small

From what I can tell, all the Tune Hotels are new and custom built for this style. You basically get a room large enough for a queensize bed with enough space to walk around it, but not much more. In fact, a common complaint is that there isn’t enough room even on the floor to open up luggage, and the only surfaces are two small nightstands and a fold-down desk.

The Tune Hotels are NOT the cheapest options in their areas

As great as they might be, those on the lowest budgets can find cheaper hotels nearby. The Tune Hotels seem to be priced around the 2-star places in their neighborhoods, so in many of these Asian cities you can literally find hotel rooms at half the price, and hostel beds even cheaper, of course. So it’s really about getting some luxury in a price range where you’d normally expect none.

They have some jaw-dropping promotional rates, but not many 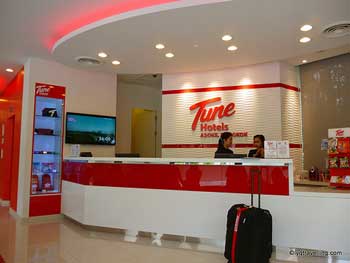 One similarity the hotel chain has with the low cost airlines is they offer amazing rates on certain hotels at certain times to get your attention. Various locations offer specials from about US$10 to US$16 per night, and if you happen to be going there during the date range you could be in luck. But these promotional rates don’t include the extras like A/C, towel, and Wi-Fi that most people prefer, so they might be a bit deceiving.

You can actually book the rooms cheaper on another site

This might change in the future, or it might not, but as of now you can actually save about 10% to 20% by booking on Agoda.com as opposed to the tunehotels.com website. Agoda dominates the Asian online hotel market, so price-sensitive travelers get discounts on Tune Hotels that include the towel, A/C, TV, and Wi-Fi package. If you don’t want this package then the official website will still be cheaper.

The TV and Wi-Fi are very good, with a catch

Each Tune hotel room has a large flatscreen TV, and at least some have actual high-def channels. In nearby budget hotels you’ll usually get a much smaller TV with fewer channels and no high-def.

The Wi-Fi is a little controversial for a couple of reasons. For one thing, free in-room Wi-Fi is pretty much standard in even the cheapest hotel rooms in Asia, so paying extra for it can seem odd. Also, the Tune Hotels use router software to block bittorrent traffic, so even if you do pay you won’t be able to download Linux distros or other popular bittorrent files.

On the other hand, by charging for Wi-Fi and limiting its use, it makes for faster speeds and more reliable service for those willing to pay a bit for it. In my own experiences the Wi-Fi speeds for things like downloading podcasts were definitely faster than I had in other hotels nearby.

Tune Hotels are definitely not for everybody

I find it interesting that the TripAdvisor reviews for these Tune Hotels are not stellar from what I’ve seen. While many people seem to love the concept, many others are surprised by what isn’t included in the room price. Either way, I think it’s important for potential guests to know what they are getting into before booking these rooms.

They seem ideal for those in town for just a night, or business travelers who don’t plan on lounging around in the room during the day. But for leisure travelers staying for several nights or more, there are probably better choices nearby.

If you get a chance to stay in a Tune Hotel it’s worth considering for sure, and I wouldn’t be surprised to see the concept spread to other new hotel chains in different parts of the world soon.