In early January I published the newly-updated cheapest European cities list, also known as the European Backpacker Index for 2012. As with the previous year, the list contained the 40 (more or less) most popular tourist cities in Europe, from cheapest to most expensive. By request, I’ve just added 7 new European cities to the site in general, and also to the Backpacker Index.

Choosing the cities to cover is a bit tricky because the idea is to list cities in as many different countries and regions as possible, without getting too granular. This site is a trip-planning resource, not a complete travel guide, so I leave out cities like Seville in Spain and Marseilles in France because the prices there are quite similar to nearby cities that I do include.

In the comments and by email I’ve received a great number of requests to add various cities in the former Yugoslavia area. Thanks also to some specific personal help, I’ve been able to add a couple of those, and it turns out they are all very cheap by European standards, just as advertised. In fact, #3, #4, #5, and #6 of the 47 cities on the list are all new, and all 7 new ones are in the cheaper half of the list.

Cheap cities in the former East can be a rewarding challenge

Those of us old enough to remember all the hype around Prague back in the early to mid 1990s should also realize that there are fantastic opportunities still out there to be explored. Krakow remains very cheap in spite of its newfound popularity, but there are plenty of other cities (including some non-capitals) that are still early in their tourism development.

In many of them a Russian speaker will have an easier time than an English speaker, but that situation seems to be getting better quickly, and the language barrier can even seem like an interesting novelty in the meantime. Fortunately, people at the front desk of just about any hostel in any city can give you solid advice in English, and the online and mobile resources continue to get better as well. 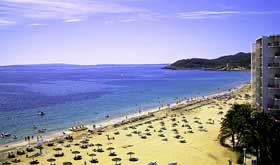 Again by request, I’ve added both Tenerife (in the Canary Islands) and Ibiza to the site and the list, even though neither is really a “backpacker” destination. Ibiza is just incredibly popular with young people so even just to see its weather by month is interesting, and Tenerife is far enough south that it actually has reasonable weather even in winter.

One feature of this site that is nearing its completion is a set of “cheap destinations with great weather” by month recommendations, and I’d written off Europe in winter without considering the Canaries. There are two more months left in the series, and then they’ll all be updated with new information and prices. See cheap destinations in February with great weather as an example, and Tenerife will be added soon.

House Sitting: A guide to finding and arranging house sits anywhere 14 Cheapest beach destinations in Europe Countries where the US dollar is strong: Cheap destinations around the world 23 Best Europe destinations in September of 2022