New York City notoriously has the most expensive hotel rooms in the United States. Making things more complicated is that there are almost 500 of them to choose from, and most of them also routinely get bad reviews from past guests as well. Americans (who make up the bulk of the visits) just aren’t used to the small European-style rooms and the city noise that inevitably creeps in to any central hotel.

Especially if you haven’t been to New York City before, searching through the hundreds of hotel choices is confusing and extremely time consuming. That’s why I created this page as part of our Recommended Hotels series. I’ve lived in New York City for many years and also visited as a tourist dozens of times before and after, so I can confidently help you pick out a great hotel from a short list.

Each hotel and hostel I’ve recommended is an ideal choice for many visitors, and I explain who’d be most comfortable in each place I recommend. Check the guest reviews yourself and you’ll notice that each of these stands above its competition in each price category. See also our recommended London hotels and recommended Paris hotels for editors’ picks.

Basically, these hotels and hostels all…

I’ve spent many hours going through all the factors to choose the places we’d try to book on our own next trip.

–By far the cheapest beds in a good hostel– 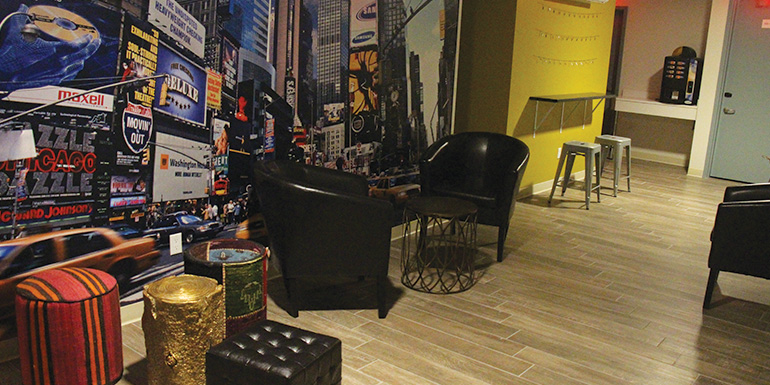 Those on the tightest of budgets will appreciate the Columbus Circle Hostel as definitely the best of the cheaper hostels in New York City. The location is excellent, only one block from Central Park and at the edge of a convenient non-touristy neighborhood where most things are cheaper and easier.

The rooms at this 94-bed facility are small, and the cheapest bunks are in the 14-bed room so this isn’t an ideal hostel for those who like to spread out. Aside from that, the kitchen is large and the common areas are nicely appointed, plus the staff get high marks for their helpfulness. With a great location and at these prices this is a perfect choice for many cheapskate backpackers.

Beds starting at $31
Book the Jazz on Columbus Circle Hostel 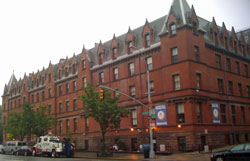 Nearly every hostel in New York City is quite expensive and also gets mostly terrible reviews. The Hostelling International – New York is a huge facility in the Upper Westside that is expensive but at least it gets great reviews from the thousands of past guests who are asked. It’s close to a subway station and Central Park, but best of all it’s in a mostly-residential neighborhood where cheap eats and happy hour drinks are easy to find (unlike Times Square).

The rooms here are relatively large and there is free wi-fi through the building. Seriously, if you are picky about a clean hostel with a cool location, good beds, good service, and all the extra amenities that hostel people have come to expect, then book here. You could save $5 or $10 at a crappy place you won’t like in the end.

Note: Hotel “starting at” prices listed below were the cheapest I could find for each hotel, usually for a single room. It’s likely your dates will show higher prices, especially for a double room, but this doesn’t mean it’s not a great deal. Please compare prices you are quoted to prices of similar hotels and you’ll usually find that these are bargains. 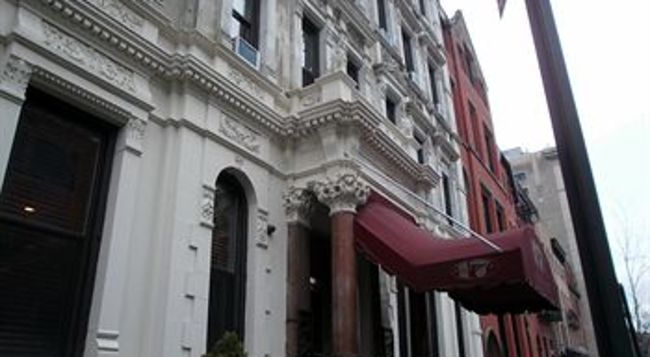 If you are looking for the cheapest acceptable hotel in New York City, the Hotel 17 is a great choice. The rooms are small and you’ll be sharing a bathroom out down the hall, but most rooms have a sink inside and everything here is spotless. The rooms are small, as you’d expect in this price range, but they have funky old-school decorations that will appeal to many.

Perhaps the best feature is the location in Grammercy Park, which is an upscale residential neighborhood just northeast of Union Square. In Times Square you’ll find that everything is either very expensive, or terrible quality, or both, but in this area you’ll be eating and drinking alongside locals who know better. It’s close to the Downtown nightlife and walking distance to most Midtown attractions as well. Again, if a low price is the first thing on your checklist, then book here if they have availability. Madonna once stayed here, for what that’s worth, and there’s free wi-fi throughout. 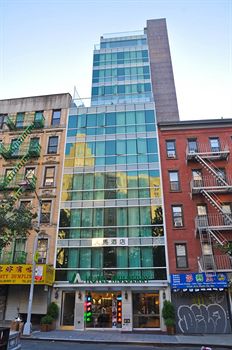 Located in Chinatown near what’s left of Little Italy, the Hotel Mulberry is a fantastic low-price choice for those who want to be Downtown instead of in ultra-crowded Times Square or near Central Park. Rooms here are simple, but they are kept spotlessly clean and the service is generally quite good. The hotel only opened in 2010 so almost everything is new as well, and there’s free wi-fi available.

In this price category you normally see many angry reviews for NYC hotels, so this place stands out for having a very positive reception from nearly all past guests. It’s much easier to experience the city like a local and also save a lot of money on better food and drinks than you’ll find in Times Square, plus the city’s best shopping districts are only blocks away. A Subway station is close as well so getting uptown or down to Wall Street is fast and cheap anyway.

Rooms starting at $205 per night, including breakfast
Click to find best rates for Hotel Mulberry

The Candlewood Suites is part of a national chain, and the location near Times Square offers astonishing value for New York City. It’s actually on 39th Street between 8th and 9th Avenues (incorrectly located on some maps), so it’s a few blocks away from the madness of Times Square itself. Those wanting to stay in the heart of it all will find this to be plenty close but removed enough to not be annoying.

The real hook here is that each room is indeed a small suite, with a small kitchen including stove top, microwave, and dishes. You also get free wi-fi in each room, unusually comfortable beds, plus free use of the laundry machines, so this place is ideal for those staying more than a few days. The rooms are only made-up weekly for longer-stay guests, but everything is new and clean when you arrive so this is a small sacrifice for most. If you can get a good online rate this place is a huge bargain.

–Stylish luxury in Midtown at an appealing price– 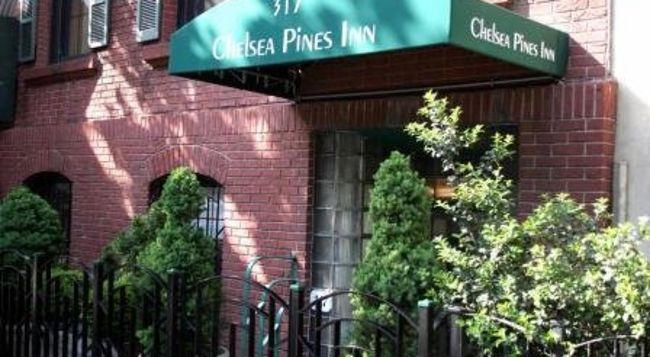 With rooms that are quite large by New York City standards, the Distrikt Hotel is a very popular choice in Midtown and it gets some of the best reviews from past guests of any New York hotel. It’s located just two blocks from the edge of Times Square so it’s a short walk from many attractions, including some of the best shopping in the city.

Once again, the staff at the Distrikt Hotel seem to be the key to its success, with most previous guests raving about the help and the fantastic insider tips they received while staying. It’s not a very trendy part of town, but it’s central and has a 4-star feel at a price that is low for many 3-star hotels in Manhattan.

Rooms starting at $229 per night, including breakfast
Click to find best rates for the Chelsea Pines Inn 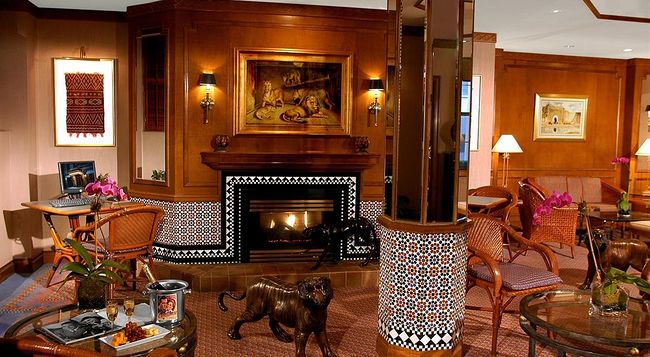 The Casablanca Hotel Times Square is actually the #1 rated NYC hotel in TripAdvisor, in spite of prices that put it in the middle of the pack. This is a 48-room (and mini-suite), Moroccan-themed boutique hotel just a block from the heart of Times Square itself. Most hotels in this district are drab and disappointing so the Casablanca stands out as an excellent choice.

The rooms here are large enough to contain a dining/work table in each one, which is also unusual in this neighborhood and price range. You also get use of bath robes and luxury bath amenities, so this is a perfect choice for a romantic getaway or for business travelers who want creature comforts. There’s also free wi-fi in each room, a DVD player, and many extras that you’d normally not expect anywhere near this price range. During slower periods the online specials are great, but during busy periods expect to be quoted a much higher price than this. It’s still worth it for those who can afford it.

Interactive map of the above hotels and hostels

Caribbean all-inclusive resorts are on sale at Expedia.com 6 Reasons 'fast travel' might be your best option 16 of the Best romantic holiday destination ideas for couples Recommended London hotels and hostels that offer good value