One of the most popular locations for study abroad students or young people of this age is the city of Barcelona, Spain. Not only is it a great combination of history and of modern society, but it is also a place where you can end up stretching your dollar quite a bit.

There’s a lot to see and do and there are a lot of student discounts, so you shouldn’t feel the need to skip a trip there if you are worried about paying for it.

Getting to Barcelona as a student

One of the best things about still being under twenty-six is that you can get some great discounts — and still being in school can get you some even better ones. There are a lot of different sites out there that can offer you some good deals, but I’ve found the best are STA Travel and StudentUniverse. You would be surprised how a better deal is easy to find.

Also, keep in mind that flying to Barcelona is cheaper during certain months when other students aren’t taking over the city. You might want to consider looking into skipping spring break and going another time when flights aren’t overpopulated and you won’t be fighting for good deals on hostels.

One of the most enticing aspects of Barcelona is the beach, so when booking, you might also want to think about what kind of weather you can best tolerate and how much you want to save by booking at a time that might have fewer tourists around.

What about a Eurail Pass?

If Barcelona is not your only stop along the way, buying a Eurail pass is something to consider. Again, being a student or under twenty-six can ensure that you can get the pass for much more cheaply.

Spain is also a great country to have it in since the railway system is very up-to-date and usually in good working order. When you are thinking about a Western European tour, this can be a great way to see more than just the major cities.

Since Barcelona is such a cheap city with some fabulous deals, hostels can be booked up quickly during the summer months or over American holidays. The good thing is that you can stay there cheaply and there are a lot of options available. Even in the more frequented areas like La Ramblas and the Gothic Quarter, there are some good options that won’t empty your pockets.

You can even expect to pay about 12 to 15 euro a day to stay in some nice, clean establishments. These are great prices — you won’t find them in other large Western European cities like Paris or Rome. You can also find them in great locations in some of the most popular parts of the city.

What you should see in Barcelona 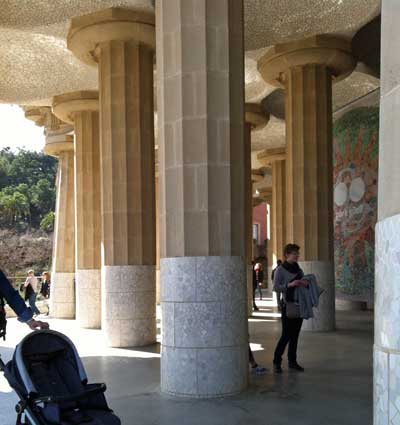 It would be a shame to visit Barcelona without a trip to Park Guell featuring architecture by the city’s most famous architect, Antoni Gaudi. Before Modernism was even considered by other artists and builders, Gaudi developed a style unique to the region of the Catalan. If you have taken a Modern art history class, you probably have studied his work.

Unfortunately, there is no student discount for this attraction, but booking it online can often save you some money and can help you when you need to book a few months in advance. Traveling with friends can get you access to a group rate, which is less expensive and can accommodate 10 to 70 people. The general admission price is €7, but it’s worth it to see unique works of architecture unlike any in the world.

Gaudi isn’t the only famous artist who called Barcelona home. Picasso was another famous artist-in-residence who spent time in the Catalan region and who produced some of his finest works there. The city of Barcelona has put together a great museum on the edge of the Gothic quarter to celebrate his life and his work.

Another great fact: it has a student discount!

You can see the majority of the museum for about €7.50, which is a great price for the amount of art and history based on Picasso’s life that you get to see. There is also a tour available, but audio guides are cheap if you need to have some more background information other than the signs that are provided. 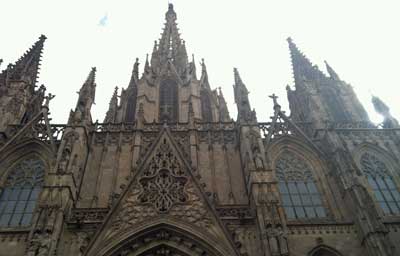 One area of the city that is definitely worth an afternoon is the Gothic Quarter. Barcelona is a fairly modern city—most of it has been rebuilt and redesigned after numerous wars and a World’s Fair in order to attract tourism.

However, if you want a glimpse of what the old city used to look like, a quick stroll around the Gothic Quarter can be the best way to immerse yourself into the past.

Churches are mostly free to get into, but you will start to notice that most of them have the same kind of architecture (Medieval/early Renaissance), so seeing one is just like seeing many of the other. If you are still interested, think about peeking into Santa Maria del Mar — it’s free to enter and is a great example of architecture from this time period. 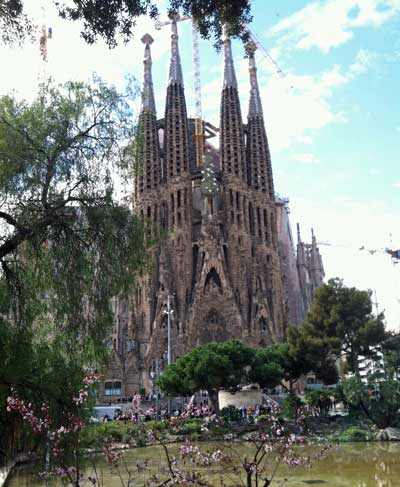 One thing you most certainly should do when you arrive in Barcelona is to check out another work by Gaudi, the Sagrada Familia Cathedral.

Still a work in progress, it’s a living, breathing tribute to Modernism. Though it’s essential to visit and to take a look at the exterior, it is not to go inside. Regular admission is €14.80 Euro, though students can get a discount for €12.80.

Taking some time to snap a picture of the fascinating façade should be more than enough, and you can save some money for some delicious food.

One of the reasons why Barcelona is such a popular place for young people is that there is a lot to do without having to worry about paying a ton of money. It’s also a great location to visit during different times in the year.

The Magic Fountain of Montjuic is worth a quick metro trip and can be the perfect place to bring friends or a significant other. Best part? It’s free to watch the light and water show built for the Great Universal Exhibition of 1929.

The show starts at different times on different days, so you might want to think about looking up the schedule earlier in the day to make sure you will get there on time.

Of course, the beach can be one of the best attractions. If you are considering going topless abroad, this is the place to do so. June is a great time to lay out a towel or rent a seat or two (usually cheaply depending where you are on the beach). Tourists haven’t arrived yet, and it’s still warm enough to get some tanning done.

Also, the harbor can be a great place to relax and enjoy the water without paying any money. Think about stopping by one of the many bars on Las Ramblas and having a drink before taking a seat on one of the docks.

Food on a student budget in Barcelona 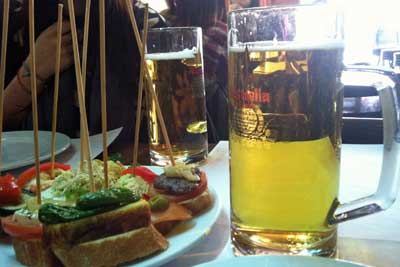 Barcelona is one of the best places to get a great meal. Even better? It won’t cost you much. Even the most expensive restaurants on the strip of Las Ramblas are reasonable for students.

You might want to consider ordering several different kinds of tapas in order to get the full affect of Barcelonan cuisine. With so many options, you might think that it would be expensive to try them all. However, most can be ordered for €5 or €6. Have an accompanying beer and you are set for the evening. The portions are also usually large, so just by ordering one or two you are set.

Another great dish that doesn’t cost much is paella, which you can order with meat or with seafood (highly recommended since Barcelona’s harbor provides some great kinds of fish). You can order a large helping for €11 or €12 and that is often enough to feed two or three people — incredibly cheap prices for the quality of food that you get. Don’t forget the sangria — also cheap at €8 or €9 for a pitcher.

Street food is another option if you are walking around and you are starting to feel hungry, but there are definitely fewer options than most European cities. A churro is worth visiting a stand, and ice cream can be nice on a hot day.

If you are considering Barcelona as a location, you might want to think about investing in an International Student Identification Card. Not only can these help you get some good deals on flights and a Eurail pass, but they can also help you when you need a discount on a hostel. It costs about US$25.

How does it help me in Barcelona?

A student card will most likely be of service to you when you are looking at hostels in Barcelona — especially if backpacker hostels are more of your style. It won’t help you much when you are trying to get into any churches since most of them are free, but ticket offices might ask to see it when you are asking for a discount at museums.

Final note: watch out for pickpockets!

Though Barcelona can be an amazing city for those on a budget, it can also be easy to lose some of your hard-earned cash to gypsies or pickpockets that ride the metro or scour the streets for tourists. Make sure you have a way to keep your money close to you — either by purchasing a money purse or hiding it in a secret pocket. You would be surprised how skillful these pickpockets are.

Alexa Schnee has always wanted to be a writer. She loves the smell of the bookstore, because nothing in the world smells exactly like it. When she isn’t writing, she’s murdering some musical instrument or hitting the road. She will never, ever like math and will always love dancing in the Montana rain. She is a recent graduate of Sarah Lawrence College, and currently spends her days traveling the world and drinking too much coffee. She is currently a writer for Elite Daily and her first novel, Shakespeare’s Lady, was released April 2012.