American fast food is often poor value, especially outside the US

This isn’t a rant against American-style fast food – eat what you want – it’s a rant against the notion that it’s cheap or a good value. In its homeland ‘fast food’ is rarely the best budget option, and once you leave the US and Canada, it’s often quite a splurge.

For these comparisons we’ll define “American fast food” as the brands you are most likely to see outside the country, namely McDonald’s, Burger King, KFC, and (lately) Subway Sandwiches. All of these franchises can be found in larger cities all over the world, and in a twist that some may find surprising, they are often much more expensive than more traditional local options. Below we’ll mostly use McDonald’s for comparisons, but prices at those other chains are quite similar everywhere. 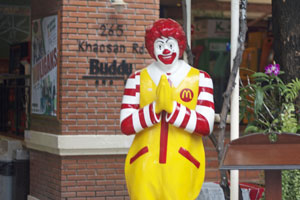 We’ll sometimes hear people in the US explaining the popularity of fast food chains is all based on the it being so cheap that many people have no other choice, but the reality is that most people eat it because it’s usually easy to find, and they like the taste.

At this point a “meal deal” at any of these chains will cost around US$5 or more. Anyone who has some access to a kitchen at home and/or a supermarket can make and carry a similar amount of food (like a turkey sandwich) for about half this price.

Unfortunately, if you are traveling in the United States and you aren’t in a large city, your other budget eating options might be very limited, but it’s rare to find yourself in a helpless situation if you aren’t actually in the mood for a burger or some chicken nuggets.

Fast food can be shockingly expensive in other countries

Partially inspired by the Economist magazine and its annual Big Mac Index, it can be fascinating to see what these identical burgers cost in other countries.

According to their 2010 figures, the most expensive Big Macs in the world (this is just for the burger, not for a meal deal) are:

As part of a “meal deal” (including fries and a drink) you’ll be spending between US$10 and US$14 in these countries. It’s true that part of this has to do with these currencies against the US dollar (as of November, 2010), but you have many cheaper choices in all these places, regardless of the exchange rate.

While a burger, fries, and a Coke meal must owe at least some of its popularity in the United States to the fact that it’s always one of the cheaper options for those eating out, it’s strange to think that in many, if not most, countries of the world, locals are willing to pay a large premium to eat these things.

And before you say, “it’s only the tourists eating at those places,” that is a common but incorrect argument set forth by residents who are embarrassed that many of their fellow locals actually enjoy the stuff. I’ve been in these restaurants all over the world and I’ve yet to see one where locals didn’t dominate the crowd. 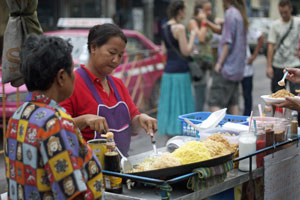 I recently spent 3 months in Bangkok, far away from the tourist areas, and while there aren’t McDonalds on every block (like the 7-Elevens), there are plenty to be found. A Big Mac there costs 70 baht (US$2.36), which makes it one of the cheapest Big Macs in the world, yet at street stalls directly outside you can get a big and filling bowl of chicken noodle soup (eat there or take away) or something similar for 30 baht (US$1.01).

Even if you are in the heart of the Khao San Road backpacker district, you can get a steaming plate of freshly prepared pad Thai for the same 30 baht. Homesick travelers might have an excuse for having an occasional Big Mac, but it’s mostly locals who line up to pay a much higher price for an American-style hamburger.

There are no McDonald’s in the Medina (Old City) part of Marrakech, but there’s one right in the heart of the New City. Nearly every tourist who comes through town eats at least one dinner at the Djemaa El-Fna food market in the main square of the Medina, though it’s mostly locals filling every seat. Prices range from 10 dirhams (US$1.25) for a fresh sausage sandwich, to 15 or 20 dirhams for tajines or some of the other dishes at the low end of the scale. Plenty of dishes are 30 dirhams and up, but most local favorites are less.

The McDonalds in the New City charges 36 dirhams (US$4.48) for a Big Mac alone, the last we heard. There are plenty of far more expensive restaurants in Marrakech, obviously, but still a Big Mac is a splurge for most locals.

In one of the more ironic situations, the place known for arguably the best (and often cheapest) beef in the world, sees customers lining up to pay around 14 pesos (US$3.54) for a Big Mac. At the same time, you can buy a meat-filled empanada in Buenos Aires for around 3 or 4 pesos in many places, so even if you need two of them to fill you up you are out no more than about US$2.

Better yet, if you go to one of the more homey and casual parillas (grill restaurants) you can find an excellent steak with a salad and maybe even a small block of fried cheese for not much more than the McDonald’s burger alone. 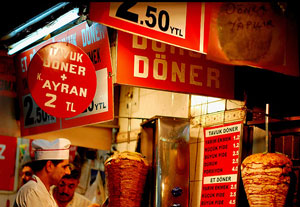 Middle Eastern food tends to be one of the great bargains all over Europe, and of course in Istanbul itself it’s quite easy to find meat-filled sandwiches such as döner kebaps, fish sandwiches, and hot dogs for anywhere from 1.5 to 4 liras (US$1.07 to US$2.86), with plenty of choices on the lower end of that scale.

A Big Mac costs around 6 Turkish liras (US$4.26), and when you add in fries and a drink you are over US$6. So once again, for the novelty of the classic American fast food meal, you’ll be paying perhaps double what you’d pay for a similar quantity of local casual food. 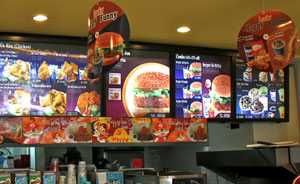 Just to mix things up a bit, let’s look at a city with too small of a “middle class” to even justify opening a McDonalds. There are still no branches in all of Vietnam, and while that might be partly the government’s decision, there are a few branches in Hanoi of Lotteria, which is a Japan-based chain that’s similar to and based on McDonald’s, and there’s a busy KFC just north of Hoan Kiem Lake in the heart of the tourist district.

A hamburger at Lotteria, which is not in the tourist district, costs about 30,000 Vietnamese dong (US$1.54). Locals have many excellent local options instead, including a steaming and filling bowl of beef phở noodle soup for about 15,000 dong at many places (though tourists will likely have to pay more based on Hanoi’s infamous sliding scale).

Notes on the above comparisons

Obviously, it would be quite easy to find a meal in any of these cities that would cost far more than an American-style hamburger, so I’m not implying that they are a super-premium meal. Also, McDonald’s and the like are far less common in these cities than anywhere in the United States, so the locals seem to be willing to pay more partly out of the novelty factor.

However, it is interesting to fans of economics to consider the various forces at play here. The labor costs in all of these cities is far less than in the United States, and real estate is typically far cheaper as well, yet the actual prices at these American chains tend to be quite similar to prices in the US, and in some cases even higher.

With McDonald’s in particular there was a recent case where the remaining locations in Reykjavik had to close down because the only approved source of the food compenents was in Germany, and when Iceland’s currency took a dive the cost of the meat and so forth would have made the burgers astronomically expensive.

Since McDonald’s requires all their food to only come through “official” channels, this might drive prices far higher than they otherwise would be, even in countries where beef and vegetables are quite cheap. Still, American fast food is hardly a bargain anywhere in the world.

Is the Helsinki Card 2020 worth it? We review value and prices here Best Puerto Plata all-inclusive resorts for couples, families, nightlife & more When is the best time to visit Costa Rica? Here's how to decide 23 Cheap destinations in 2022 with great weather in November